Well, it was a fair day today…  Weather was great and we caught a few fish.. actually just 3.

We launched at McCown Valley Park again today, but went up the lake and fished around the mouth of Juniper Cove.  We caught 2 on Pop-Rs and one on a T-rig.  We had a number of other bites and I lost another one on a Pop-R… just sucked it under.  The first two literally hammered the lure, gobbling it down completely. 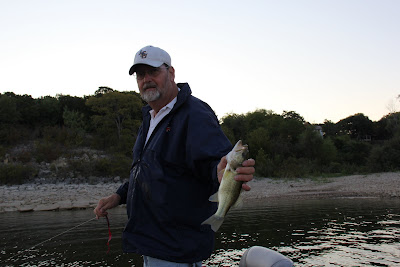 I just wanted to make sure we got a picture in case we didn’t catch any more.  But the second one went 14 inches and the 3rd one was about 17 inches. 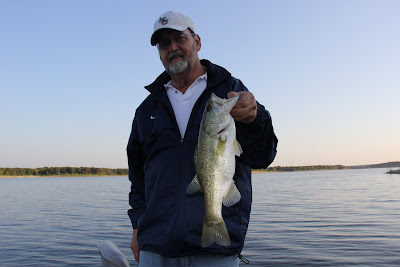 This one was a Pop-R fish…   I love those top-water fish.

The ramps continue to be in good shape.  I think you can probably still launch anywhere on the lake and the Corps is taking good care of the sliding boat docks.

Fishing is a strange deal… yesterday, The Boss boated 4 and I got none.  Today I had 3 and she had none…..  who knows why..  Though yesterday, she caught hers in pairs so I think we just lucked into small schools swimming by.  Today they were scattered.  Yesterday, most of the fish were caught in 6 to 8 feet of water, and today they were all caught in a foot or two of water….

Yesterday was a great day and we stayed out until after lunch….   today with the wind what it was, we got off the lake at 10:30 a.m.

And, like yesterday, there were very few boats on the lake.  I think we saw two or three today and only one of them was a bass boat.  We had the McCown ramp and parking lot to ourselves.

Like I said yesterday…. I think the bass fishing is picking up a little on Whitney….  we have had 3 days this week where we caught 3 or more fish and had a number of bites.  All the fish we caught this week have been fat and chunky….  and very feisty..  Healthy fish.