That about sums it up… HOT & TOUGH!

We arrived at the lake about 6:30 a.m. this morning and were on the water by 6:45.  The temperature was already 80° or better….  The water temperature was 85° and stayed that way most of the morning.  The winds were light this morning, less than 5 mph from the South, Southeast.   The lake is 5 feet 2 1/2 inches low, or there abouts according to the Texas Water Development Board web site.  The water seemed a bit murky or dirty to us… lots of “stuff” floating in it.  Visibility was about a foot to a foot and half where we fished mid-lake….  It was a cloudless sky today, making it hot from the get go.  If there had not been a bit of a breeze we would have felt like we were roasting at 7 a.m.

We fished some top-water, some crank bait, and some worm… actually all our usual stuff…   We had two bites on worms.  The Boss put hers in the boat and it was about 12 inches…   I missed mine. 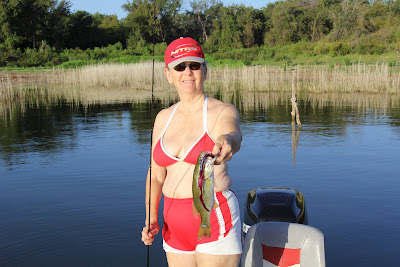 The bites we had came in a little hole on a flat point, about 6 to 10 feet of water.  We saw very few fish turning.  We saw very few birds.  We saw no bait fish breaking water.   We fished mostly on main lake points in the Cedron Creek area.  I guess if you are going out there, you could scratch that area off your list….  all of the mid lake area I would suggest could be marked off you list.

Actually, we were the only rig on the ramp at McCown when we launched and when we came in…. No one else went out of McCown that we could tell.  There was one pontoon rig truck and trailer in the Cedron Creek Park parking lot.   We did not see that boat on the water.   The first boat we saw was at 9 a.m. on the button.. it was a ski rig.   As we were going back to the ramp, we saw a small boat on the other side of the lake that could have been a kayak, and we had a striper boat pass us at the ramp.   There was just little to no activity on the lake.  The McCown Valley Park and the Cedron Creek Park seemed to be relatively empty as well.  As hot as it has been the last few day, one can understand this.   We can tell you the ramp is still in good shape at McCown and the Corps is keeping the sliding dock just right in the water.

The Boss tried to get a picture of the moon over this point…  It looked good on the lake, but we just couldn’t get it framed for the camera…  the moon is in the picture… just small.  This was about 10 a.m. 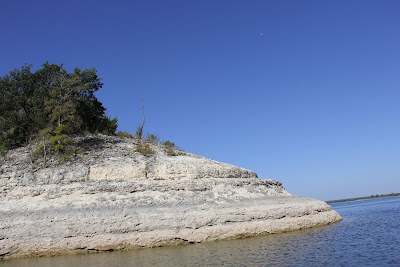 We keep thinking .. that is hoping that the fish will start to kick in… we thought they might be going to last week and maybe they were until this hot spell came along.   Well, there is a cold front in the forecast for the weekend..  maybe… maybe…  Or, maybe we just need to be elsewhere on the lake… who knows.