Well, I can tell you what it feels like to be a millionaire… at least I think I can.

We went back to Lake Whitney this morning.   We arrived at 7:15 and were on the water pretty quickly.  We only saw one or two campers in McCown Valley Park.  No one else was on the ramp.  We had the ramp and lake to ourselves…  I think that must be the way millionaires feel…  they look out at their vast fortunes, holdings and property and think:  “All of this is mine!”  ….. Well, that’s the way I felt this morning…  the lake was just beautiful and it was all ours.  Actually, I think we might have seen one or two boats all day and they were not close

The air temperature was about 58° or 60° when we arrived.  The water temp reading on the depth finder was 73°.   Eventually, the water temperature did warm up to 77° by the time we left a little after noon.  The winds early on were very light… 2 to 3 mph, but they did get up to around 8 or 10 mph by lunch time.   The sky was absolutely clear blue, the bluest of blues…  an Un-Cloudy Day by any measure.  The lake remains relatively clear, though we did find that the water near the bridge was a bit cloudy like it had something in it.  But otherwise, the water was very clear.   The lake level is 526.30 or about 6 feet 8 1/2 inches low.  It seems to be falling pretty fast.  I am guessing that the Corps is releasing some water because it can’t be evaporating this quickly; it is just not hot enough.

The Boss pounded me today.   She boated 3 and missed a couple of others.  I boated ZERO… NONE, NADDA, ZIP!  The bass were biting really soft for me and I missed 4 or 5 on T-rigs and I let one get off of a crank bait.   Just really frustrating for me, but The Boss got some big laughs out of it…. and she did get in a lot of “get the nets” even though the fish were not really that big.

This is one of her smaller ones. 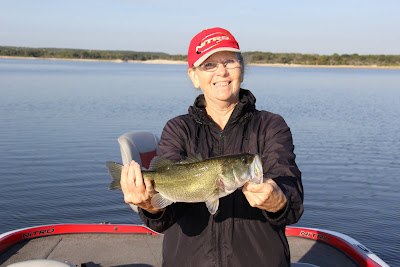 Her largest was 3 pounds 1 oz.  I told her I had a bite, and she screamed that she had one too and that she needed the net.  Mine stripped my worm off on the hook set, so I just dropped the rod and dug the net out of the locker.  Probably a good thing that I got her fish in the boat. 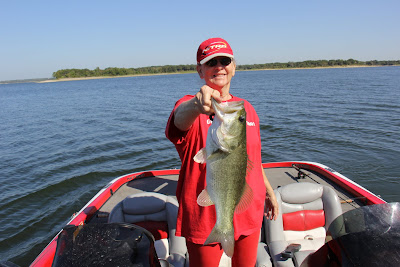 We had a pretty good time.  We fished early down near Cedron Creek where The Boss put two of her fish in the boat…. one right after the other in a little stumpy flat.  Then we moved up near Juniper Cove where she picked up the bigger one.  This morning, we fished with top-water, crank baits (Spro and Rattle-trap) and T-rigs.  As usual, it was the T-Rigs that produced, although, I did let one get off of my Spro.

We called the Pit Stop from the McCown ramp and they had our Burger Basket ready just about the time we walked in the door…  It and the fries were steaming hot!  Can’t beat it for $6.00.   And, we gassed up there today…  gas was O-N-L-Y  $3.59 a gallon… cheaper than in Burleson yesterday and actually it dropped two cents between the time we went to the ramp this morning and got back at noon… what a deal… another Lottery winning deal! Thank God we only had to fill the pickup and not the boat (57 gallons)… ouch!

It was a great day on the lake… and yes, we felt really lucky… just like Lotto winners… we had our own private lake and the fish were biting.  What more could you want?