It was not a Willie Nelson Un-Cloudy day today… it was definitely C-L-O-U-D-Y!!!!

We were up early this morning…  coffee and sausage biscuits along with a lot of Hal Jay and WBAP on the way to the lake.   The Boss makes great coffee and biscuits!

There was reportedly a lot of fog supposed to be on the highway and on the lake … at least according to the weather folks on TV… man, in my next life I want to come back as a TV weatherman… on Television, handsome, make lots of money and have a job where it is fine is you are wrong most of the time. 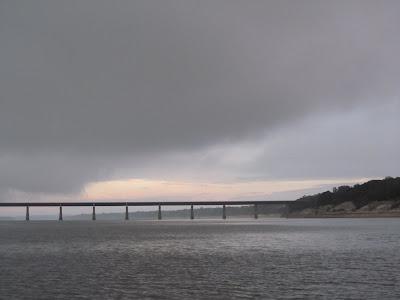 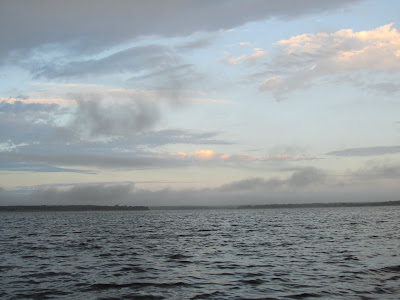 We were the first rig on the ramp at 7 a.m., but a couple of other guys showed up while we were launching.  They were white or striper fishing and headed down the lake. 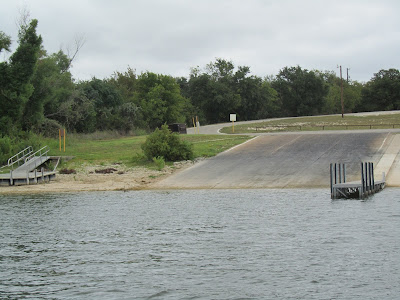 The Corps is keeping the sliding docks in the water.. and it is obvious from this photo as to why!  The stationary dock is on the ground… of course we worked around this for years… but let me tell you the sliding docks are great.  And those rest rooms at the ramps are also great….  Like to take care of bidness before we get on the water!

We did not see any gulls and only a few of the blue herons.

We moved on down the lake and tried a couple of main lake points where we found fish the last week when we were out.  And again, we found fish.  I caught two and the Boss caught two.   Mine were 14 and 15 inches, but her’s were bigger.  She had one that was 2 pounds 10 oz, and the second was 1 pound 15 oz. 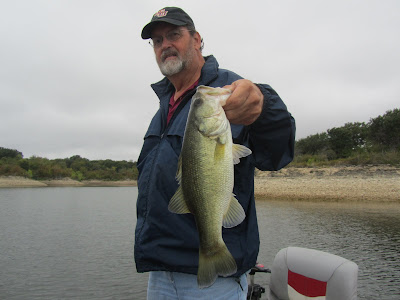 All the fish were fat…  and fiesty. 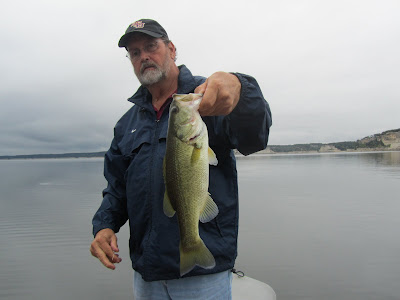 All the fish were caught on T-rigged worms… some on plum some on red shad in 6 to 8 feet of water on rocky points.

This is the Boss’s biggest one. 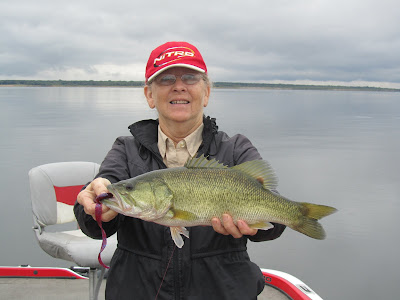 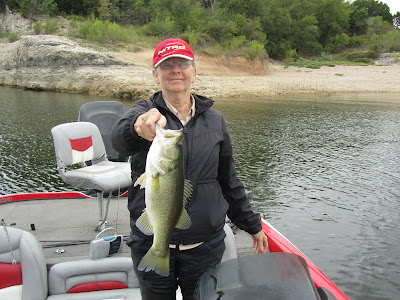 We hooked and lost two more and missed a number of bites….  that’s hard to take after fishing has been so tough the last few months.  You really want every fished hooked and in the boat.

The further we went DOWN the lake, the more bait fish we found.  The wind at times was nearly calm.   You could see large schools of tiny minnows rippling the surface for as far as you could see.  And, there were some fish striking in them, some of them very large fish based upon the sound and size of the strikes.

We worked some top-water and crank baits around the bait fish, but just could not get a fish to take the lures.  I guess you could say we didn’t “match the hatch”.    But, seeing bait fish and bass or stripers working in them is a real good sign.

We only saw 4 boats today… one striper boat, one pontoon boat and one other bass boat that put in at Cedron Creek.  That bass boat headed up the lake.

At 1 p.m. we went on back to Whitney and picked up one of those $5 foot long Subway sandwiches and made the trip back to Cleburne….  By the way, the roads are all in use now and in very good shape.   Nice ride down and back and not beating the boat to pieces.

The McCown Valley and Cedron Creek parks looked to be relatively empty.  If I were a person who like to camp out and fish, now would be the prime time.  Not many people on the lake, parks are in great shape, not many folks camping there now, cool nights and relatively cool days… and the fish appear to be starting to bite.   Get out there and wet a hook if you get the chance.