Another beautiful day on the lake…. 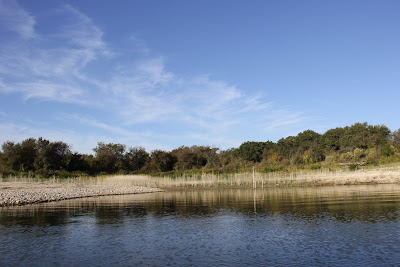 We didn’t get on the lake until 8 a.m. this morning….. It was a little cool, so we took our time getting down to the McCown ramp.   The lake level is 524.73 or about 8 feet 3 1/2 inches low.   It was about 55° when we got to the lake.   The water temperature was still 70° to 71°.   The  mid-lake area remains relatively clear.  I would guess that visibility is about 18 inches give or take a foot.   There are spots we fish that we can see rocks on the humps we fish and they are still in 2 to 3 feet of water.  It was mostly sunny this morning with a light 6 to 7 mph breezed from the northwest when  we put in and it picked up a little by 11:30 when we came off the lake… in fact, starting to white cap some on the main lake. The air temp had got up to about 70 degrees or so by the time we came off the lake… it was really nice.

The ramp at McCown remains in good shape, though I wish the Corps would move the sliding dock down the ramp some so that it is usable….  If the lake falls a little more, that dock will start to look like the fixed dock there, as in “out of the water and useless”. 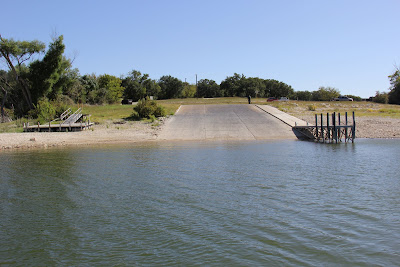 But, its OK I guess, we just get in and out of the boat on the ramp.  there were two other rigs there when we arrived this morning… we were running late I guess.  And, another rig had arrived when we left.  There were at least 6 or so campers in the park that we could see, more than there were last time.  This is great weather, I am betting the camping is great.

We also got to see a gang of turkeys there in the park… or a rafter if you like fancy words.  Anyway, there was a bunch of them. 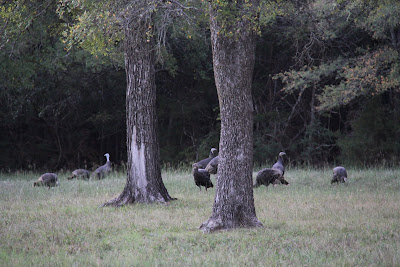 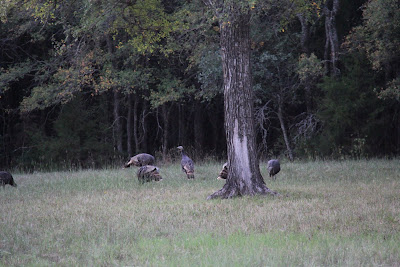 There were about a dozen in this gang…. 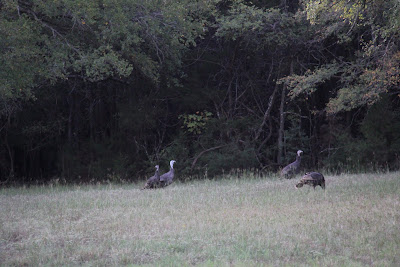 The usual bunches of deer were there too, though we didn’t get photos of them since we see them all the time.

We also had a lot of gulls on the lake….  a couple even tried to take my H2O top-water lure this morning…  and the old blue heron was working a point until we scared him off…. 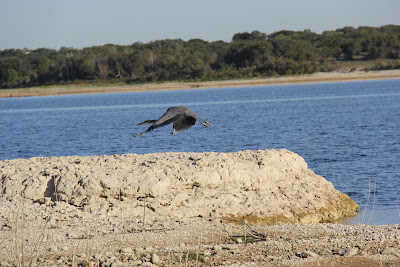 It is good to see the birds working….  a strong hint that we might catch some fish in the area.

And we did….  we caught a couple this morning… it wasn’t as good as it has been lately, but hey, you can’t catch a bunch of fish every time you go.

We caught two… one on top-water and one on a T-Rig….  This is the T-rig fish. 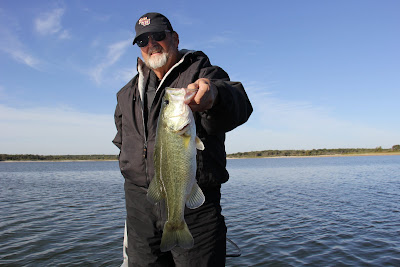 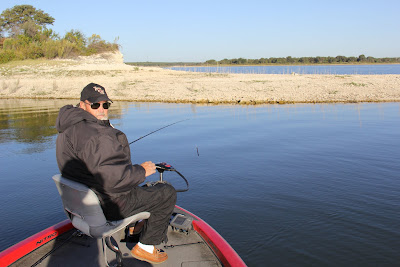 The Boss pretty much fishes the same way….

We lost a couple of other fish…  bites were slow and really soft today (other than the top-water bite)….  I broke one off on the hook set….  The Boss said I didn’t tie a good knot… who knows.. anyway,  just got a limp line back.  The Boss got one up and coming to the boat, but it managed to jump off….  We had our chances… some bites… but, they just were not taking the lures like they have been.  All the fish and the bites came in about 4 foot or less of water and the fish were holding on some kind of structure.

Well, it was Thursday and it was noon when we got on the road…..   So, we stopped in at Sisters Diner (Only open Thursday through Sunday) and had our usual chicken-fried steak for lunch…. mashed potatoes and buttered corn….   Man that steak tasted good….   maybe I had just forgot how good the chicken-frieds are there at Sisters, but the one today tasted extra special.   They had a pretty good crowd in there today… some golfers and some fellas solving world peaces and such….   always a pleasure to get some good eatings in a down-home cafe.

If you like to camp and do a little bass fishing, now is the time to go… and if you like a good home cooked meal… then stop by sisters and have Linette fix you up with some great eats.