Well, The Boss was at it again today….  she boated 3 fish before I even got a bite… and she caught 4 today…  I made her stay until 2 p.m. so I could catch up, but the best I could do was 2 small keepers. 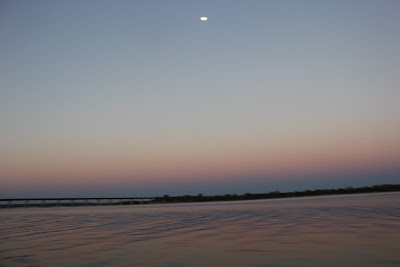 The air temperature was about 55° to 57°.   The water temperature at launch was 65°, but it warmed to 66 or 67 degrees by 10 a.m.   And, the air temperature warmed up pretty quickly too.  In fact, at 2:00, The Boss declared “Its too hot!” and she was ready to go to the house…  no wind and at least 80°….  warm.  I told her she did not need those long johns… but hey, The Boss always knows best.   Anyway the lake level hasn’t changed any, still about 8 feet 6 inches low.  The ramp at McCown continues to be great!  And, the water remains relatively clear mid-lake. There were already two rigs in the parking lot when we got there.   I don’t know whether they were hunting or fishing… all I know is that the boats were not to be seen when we rolled up.  Actually, there was a little wind early, but by 8 a.m. it had laid down completely. But 2 p.m. when we left, it had come back to 2 to 3 mph from the south.

This morning we ran up to Juniper Cove to fish.  We started on Point 7 at the mouth of the creek.   As you can see, we spotted a few fish in the river channel there.   Likely these were white bass. 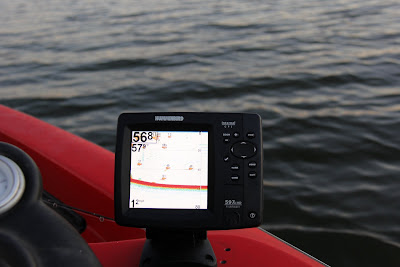 It has been a while since we picked up any sign of any numbers of fish out in the lake.  But, we are also observing that the number of boats fishing for whites or strippers out in the river channels or on some of the main lake humps have increased.    Anyway, any sign of more fish is a good thing for Lake Whitney.

I hadn’t even got my rods out and sorted before The Boss was putting her first fish into the boat….   I am going to start letting her run the boat so I can get the first casts in. 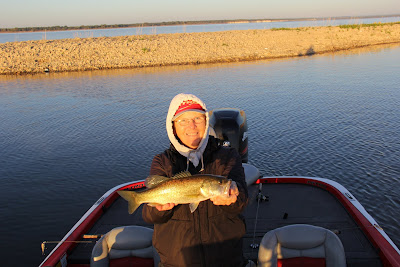 She boated two before I got started good.

It sure was nice this morning… not too cool and very calm.   The moon is, of course, still nearly full.  In this photo it looks like a white dot, but it looks huge when you are out o the lake. 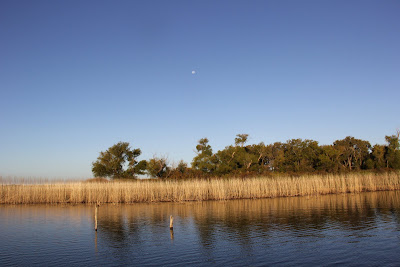 The ducks were out there enjoying the sun this morning… several were up on stumps sunning. 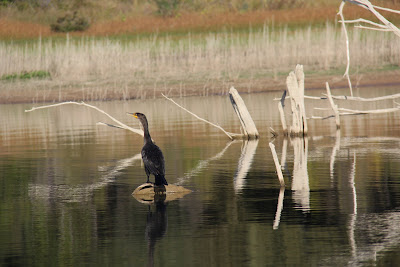 This was a great top water area, lot of stumps and stickups and I worked the heck out of them, but there was no top water bite.  In the mean time, The Boss was getting bite after bite.  They were soft bites and she did let a couple of fish get off… 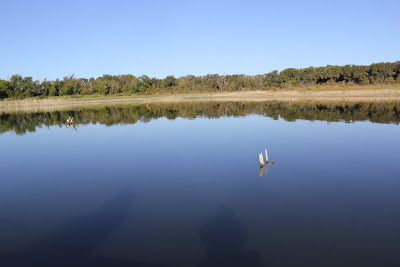 Is that slick or what?   And B-L-U-E.   The water was actually very clear and it was easy to pick out stumps and lay downs to fish.  I really thought we would pick up more fish here today.. but who knows why they bite and why they don’t.

I finally picked up a small keeper, but by then it was 3 to 1 and then that didn’t last long. 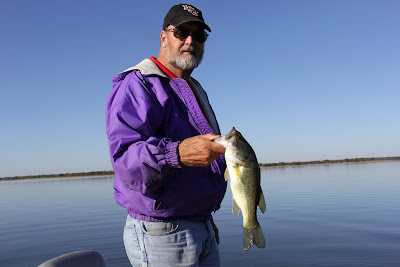 We moved to the bridge and she boated another one. 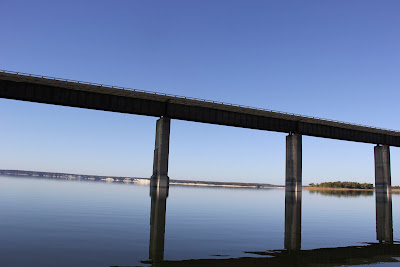 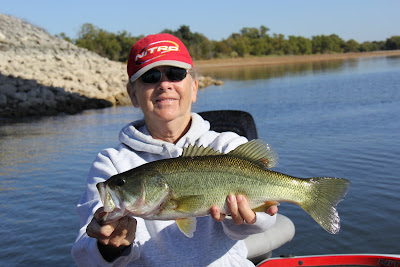 The fish were keepers, but in the pound and half to two and a half pound range.  The Boss topped out with her 4 and I finally picked up another one in the afternoon.

We had ham and cheese wraps on the lake for lunch and tried to get a quick power nap, but it was just too warm.  We just kept on fishing.  The Boss said she was letting me fish on so that I would have the chance to catch up with her…  she didn’t want to show me up so much she “said.”

We have had a good week this week, even though my fish catching has been on the short side the last few days.

McCown Valley Park seems to have no more than 2 to 3 campers in it.   The lake is beautiful, the weather is beautiful.  It is not too cold, it is not too hot…. If you like to fish or hunt, you ought to be scheduling a trip down to Lake Whitney.