Well, it is fall now….  got those cold fronts coming and going…   It won’t be long before we are hauling those big girls into the boat.

For the time being, we are scouting and practicing…

The Boss caught two today…  one a really small fish, but we counted it.  She also put one keeper in the boat.  We wanted to make sure we caught a couple so we started at the bridge rip-rap which (for The Boss) is always good for a fish or two, and she boated two right off. 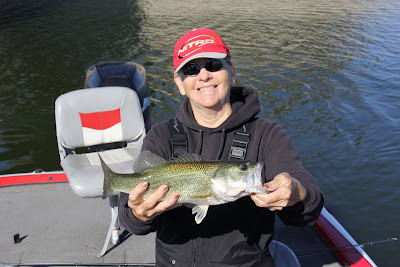 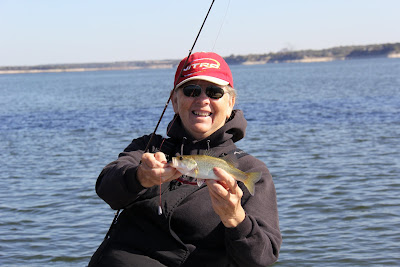 You can tell she was having fun… starting the day off two up on me.

I didn’t let her take my picture with my “small” fish, but she did get one of me with this 2 and a half pounder. 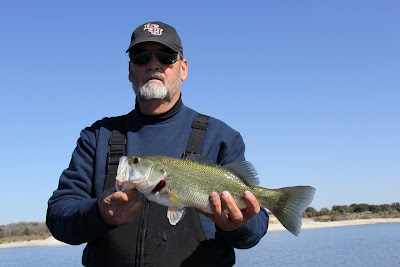 The morning started off cold… in the upper 40s or low 50s…   So, we took our time before heading to the lake.  In fact, we didn’t get on the water until 10 a.m.  The air temperature was about 55, the water temperature was 61° to 65°.   The water is general somewhat silted, but clear in places.  There was a light wind, 4 to 5 mph from the northwest when we launched, but it turned to the southwest and dropped to 2 to 3 mph.  The lake level was 524.46 or still about 8 fee 6 inches low, as it has been for the last several weeks.   It appears that the Corps has stopped releasing water.  The sliding dock is just right…  the deck about 6 inches out of the water…. easy on and off the boat.   As you can see from the pictures, the skies were cloudless today and that made the sunshine warm.

On a positive note for the lake…  we did see a few gulls circling and diving… have not seen that in a while.  We also saw some schooling bass chasing shad in the shallow…  didn’t get close enough, quickly enough to catch any, but we did see them.  Both of those are very positive indicators for the fishing… the fall fishing is going to be picking up.

This was the lake around noon… calm and slick. 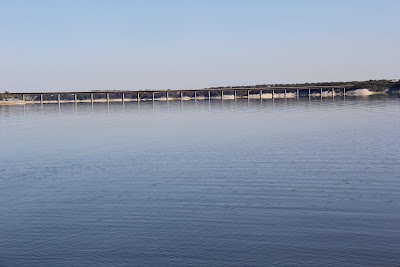 We enjoyed a lazy day of fishing….  I liked it because I didn’t have to stay on the trolling motor all day… 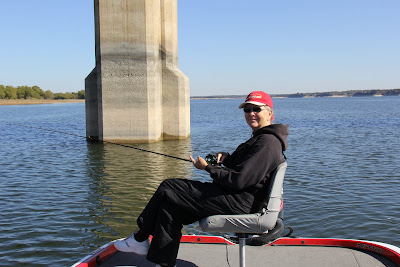 This was The Boss early on…  her usual position… resting.  It must work… she puts a lot of fish in the boat from that spot.

Sometimes, though, I like to stand….  just to give her a little advantage…   I get tired, she gets to rest… 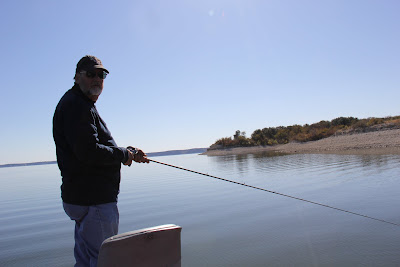 We saw only one other bass boat, but we did see some hunters headed across the lake… they looked to be camping in McCown Valley.   I would guess they could only be frustrated by some of the deer they are seeing inside the park…. which I believe are off limits….   Here is a nice buck who was chowing down at the deer feeder at the gate…  he and a half dozen doe… 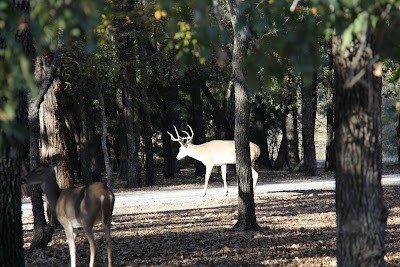 Now that is a nice rack….

Generally, the weather was good… a little cool to start with, but it warmed up nicely and we had a great day on the lake…  We boated 4 fish.. 3 keepers….  Fishing was slow and the bites were light.   We caught nothing on top-water.  All the fish came on T-rigs fished slow… If you think you are fishing slow… fish slower.  The fish all came in less than 10 feet of water.. two in shallow, two deeper….   Not many I guess, but some is better than none…..