It was a little cool this morning and we aren’t as tough as one fellow we ran into on the lake….  we waited until it warmed up a little.  We didn’t get on the water until 9:30 a.m. or so.  I am guessing it was about 40° air temperature when we hit it.  When I checked news on TV this morning before we left, it was near 32 or 33 degrees in Whitney.   The bass don’t move much then and neither do we.    The water was kind of murky and the  temperature when we launched was 58°, but it warmed to 62° before we left at around 1:30 p.m.   It was a nice sunny day today, blue skies all around.  The wind was 1 to 2 mph early on, but had picked up to around 5 to 7 mph by late morning.   The lake level is 524.28 or about 8 feet and 9 inches low.  The ramp at McCown Valley continues to be in good shape.  We have not checked the other ramps, but usually, as McCown Valley goes, so goes the rest of the Corps ramps.

I picked up a small bass on a crank bait at the bridge rip-rap right off…  we wanted to fish there before the wind got up too much.  The Boss did not find any bites on her T-Rig there. 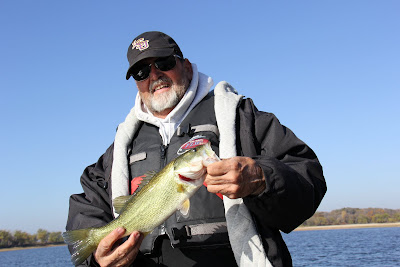 Then we moved over to the south side of the lake and worked some C-Rigs for a while.   The Boss missed a couple and I picked one up. 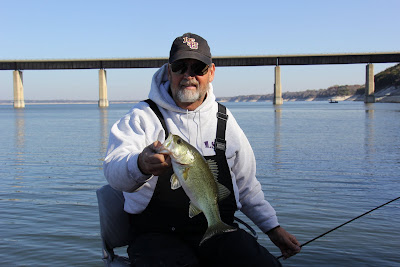 There is a fellow there in the back ground, fishing on the other side of the bridge.  He said he had been on the lake since day light and had nothing today and was leaving.   We were in our first hour so we were fishing on.  He said he read our blog and on the same day that The Boss had picked up several fish (and a 3-10) on the bridge rip-rap, that he had followed us there and picked up several fish himself, including a 6 plus.   Good to know that someone is catching some nice fish!

Anyway, the wind died a bit and we went on to Cedron Creek.   I tried to take a nap while The Boss worked some stick-ups along the shore… I had hardly got my eyes shut when she yelled that she had a fish… and “It’s A MONSTER!”   I saw the fish boil and it was BIG!  I jumped up and grabbed the net while she wrestled with it.  After 2 or 3 minutes, she began complaining that her drag wasn’t set tight enough…. the fish was just peeling off line and she was making no progress toward getting it in the boat…..  She began to work it to the boat by pulling it with the rod and then reeling up the slack….  I was beginning to think she had a log or limb, but she swore that it was a fish and stripping off line…  After 5 minutes or so, she worked it in to the boat and I dipped it up….. 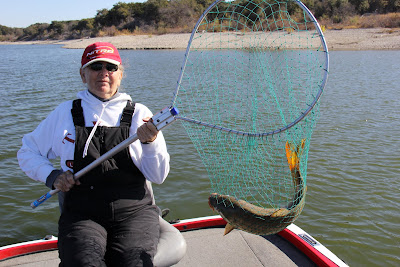 She wouldn’t hold this one up with her hands… in fact she wouldn’t touch it.  I had to get the hook out…  It was about a 12 pound carp….  sucked that Ol’ Monster worm right up…  and then put up a heck of a fight….  funny….  Talk about a disappointed Boss Lady….

Well, my nap was spoiled, so we eased on up the creek and I found another little fish on a rocky point… It was a keeper, we just were not keeping today. 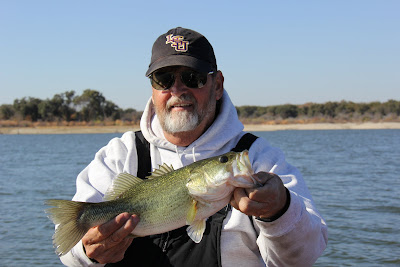 About 1:30 we decided that we had had enough of the wind…. The fish were few and far between.   What few birds we saw, were not fishing… They were sunning. 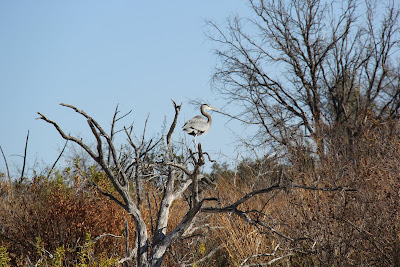 We had 3 keepers and a few other bites… not counting The Boss’s Monster.    One fish came on a square-billed crank bait, one on a C-Rig and one on a T-Rig.   Once it warmed up, it was pretty nice.   There were few boats out today.  We only saw the one bass boat and he left around 10:00 or 1o:30 with no fish.  There were a couple of pontoon boats on the water and we did see a hunter’s boat beached up the lake a ways.

We enjoyed it.   No boat problems, no trailer problems, no pickup problems….  and a nice nap on the way home while The Boss drove.