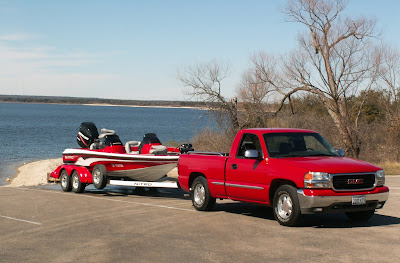 Well, we didn’t get out to the lake last week…. other than 2 hours late this past Sunday evening. We were on the water at 3 p.m. and off at 5 p.m.  We didn’t catch any fish, but we did get there in time to see the real bass fisherman gathered up for a tournament weigh-in.   We didn’t stop to chat because time was short and The Boss was having withdrawals from not having fished in the last few days.  Rick Poteet did wave me down and shake my hand…  Rick is a Texas Fishing Forum buddy that I have visited with in the past about fishing Whitney…  He can catch more fish in a few hours blind-folded than I can in a week… He knows his stuff.  He said they had 14 pounds plus… that is a good number for a winter Sunday on Whitney.  We saw a couple of other late arriving team members there and they had nice sacks of fish as well.

The lake conditions were about the same.  Whitney was a little less than 9 feet low.  The ramp there at McCown continues to be good.  It was warm Sunday, in the 70’s when we got there and the water temperature was in the 60’s.   The winds were 8 to 10 from the northwest.

We didn’t do any good in our two hours out there Sunday… but, based upon the fish we saw at ramp, they were biting and there were some good ones to be caught.  I guess we should have sat there at the ramp and fished around the boat dock where they were dumping them back into the lake.

I have got all kinds of excuses as to why we didn’t fish last week… I think there was only one day, maybe Tuesday, that the wind was down where we like it and then we just had “other stuff” going on… some family gatherings, errands to run, chores to do…  probably should have found a day or two to go.   But, you know, this week isn’t looking any better…  It was windy Monday and Tuesday and doesn’t look to be getting any better soon..  we will just have to check day to day.  It will not be today or tomorrow… just too W-I-N-D-Y!

We have been making some trips to the Whitney area to catch some of the local Texas Swing music… and they have some good stuff there.  We have been going to the Peoria Opry once a month at the Community Center there.  This is a video from this month’s Christmas show.  Check this out.

Good stuff huh!  If you get a chance, and you like good wholesome entertainment you should check out the Peoria Opry.  It happens the first Tuesday of every month…  the cost is cheap… bring a dish as they have diner at the break.