Yep…  another trip to the lake, another adventure….

We got on the road to Whitney around 6:30 a.m. yesterday morning.   It was foggy..   patchy dense fog is what the TV weather-guessers described it as….  But, it wasn’t too bad.  Visibility was probably at least a half mile or better at the worst on the way down to the lake.   And, even on the lake, you could see across the lake, so not bad at all.   The temperature was right at 60° and the water temperature was still about 55°.   But, there was a definite cloud cover and absolutely no sunshine.

We pulled up in the McCown Valley Parking lot  and got the boat ready for the lake….

The Boss has questioned my spelling of McCown….   Well, it apparently has two different spellings… and you can take your pick.  McCown Valley is how the Corps of Engineers spells it.. 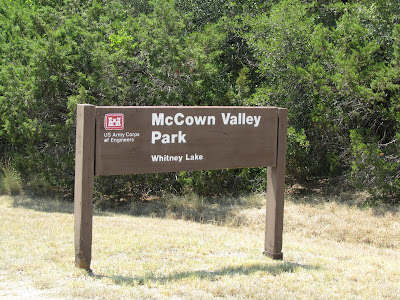 I have at least two printed Whitney Lake maps that spell it McCowan Valley…  So… take your pick.

Well, back to the story.  I cranked up to put the boat in the water and the red warning light for the battery came on.   And, it stayed on.   A quick glance at the voltage gauge told me that the alternator wasn’t putting out any current, or at least very little.   Sudden indigestion… lots of stomach acid.   Anyway, we went ahead and launched.  We were there and I figured we might as well fish.   The wind was supposed to be down in the morning and come up in the afternoon.  And, the wind was only about 7 or 8 mph.  Light by most standards.

So, we headed up to Cedar Creek and the point where I had lost a big one Sunday afternoon.     But, I couldn’t get the pickup off of my mind.   I was thinking of options.  I figured that if worst came to worst and the pickup battery didn’t get me to somewhere I could get whatever the issue was fixed, I could pull the starter battery from the boat and use it in the truck to get a little further… and there were little inch pebbles in the route home.  First, start the truck and get the boat out of the water.. big first step if the battery wasn’t all the way down.   Second, there is a service station just outside McCown Valley Park and they do some auto repair work.   Then there was the town of Whitney, and then Blum, then Rio Visita, then Cleburne….   I would just try to get from one to the other.

As I road down the lake, I checked the voltage meter on the boat…  My hair started to prickle on my neck.  The gauge showed the battery not to be charging like it should… down in the shaded area….   That was number “two”.

But, on up the lake we went.   I boated this “gooden” on the first point…  Not exactly the one I was looking for.. 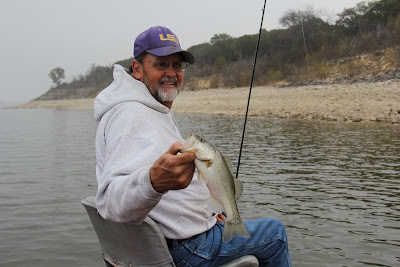 And we fished on.   Cloudy days in the winter aren’t always the best….

To tell you the truth, I was a bit aggravated and agitated because of the pending electrical issues and was having a hard time focusing on the fishing.  Not to mention that we weren’t getting any bites.

I pulled my hat off to push the hair back out of my eyes…  the next thing I know, my glasses are falling toward the water…  and plunk… in they go… only 50 feet or so deep there….  It wouldn’t have mattered even if it had only been 5 feet deep..  they were gone.    And, in the confusion at the ramp, I had left my prescription sun glasses in the pickup.  Wouldn’t have needed them ordinarily because of the cloud cover….  but, they would have been most helpful at the time.   The glasses were number “three.”

I decided I had had enough.   We cranked up and went to the ramp after about 45 minutes of fishing.

The pickup started and the red warning light for the battery didn’t stay on after the truck cranked.   Looked like our luck was changing for the better.  We loaded the boat and pulled up on the ramp and buckled it down.  Still the battery was good and the voltage meter said we were OK.   I figured we would make the trip home in the increments I had thought about….   We got safely out of the park and past the the service station outside the park… by about 1/2 a mile….  Then, the dreaded red warning light was back on…   Next stop… somewhere in Whitney.

We made a quick phone call to a friend and got a recommendation for the Western Auto in Whitney….  A great recommendation.  We got there and there were no vehicles in the service bays and two friendly mechanics who were quick to throw a diagnostic machine on the pickup and confirm the bad alternator diagnosis…   30 minutes later and a couple of hundred bucks and we were on our way.

Our friend and his wife met us down at the Cafe across the road from Western Auto and we enjoyed a great piece of Coconut pie and some coffee… not to mention a nice long chat….    A great morning after all.

Yesterday afternoon, it was an eye exam and a trip to a place to buy glasses… When the lady there showed me the frames and asked if I had any preferences… I asked for frames that floated…  but, that idea didn’t float… they had none, and she didn’t get the joke.   Another $200 and we were on our way and I should be able to see again in a week or so when the glasses arrive….  in the mean time, things will look a little darker as I am limited to the sun glasses now….  Maybe I will just have to spend more time outside and on the lake since that is where the glasses work the best.