If you read this blog much, you know that The Boss and I are retired and bass fishing on Lake Whitney is our primary pass-time. We love the lake and being outdoors… and not much beats the feel of the “tap-tap” on a worm or the awesome adrenaline rush when a bass strikes a big old top-water lure… And we enjoy sharing all the adventures surrounding going fishing on Lake Whitney… There is usually more to the story than just showing you the fish we caught…. The outdoors, the sun rises and the sun sets, the wild life and trials and tribulations of just getting to and from our favorite fishing holes.

Well, we have found another pass time as well… that is Texas swing, country and bluegrass music. We discovered this local hidden treasure by accident along about this time last year. We did a one day stint as election clerks at the Lillian Baptist Church in the Primary Election. On the bulletin board at the church was posted a notice of a bluegrass event coming up shortly thereafter…. And someone there told us it usually had really good music… And it did. We went to that show, heard about another one and one thing lead to another.

What we have discovered is a sort of underground world (as in un-publicized) Texas treasure. There are a plethora of local traditional Texas music events.. While there is some advertising, most is by word of mouth and that’s a shame.

Over the past year, we have attended many of these local music shows… They range from “jams” where musicians from beginners to aged veterans get together and play…. to formal shows. We love it. Maybe we are just “old fashioned” and love the old music.. and hey, we like the new generation of “Texas Music” as well but we think this stuff is just great.

A while back, I began to think about starting another blog.. one that would tell the story of these events, sort of like this one about bass fishing on Lake Whitney. And, most of the events take place within driving distance of Whitney. I also have received a few emails asking about my references to one or two of the events we talked about.

So finally, with the help of my son, I set up another blog site:

If you have an interest in music and want to taste some of this, check out the web site. It already has several posts on it. It also has a calendar of events page. That page will give you a head start on where these things happen. We had to learn all of that the hard way.. sort of like the way we learned to bass fish (or not) on Lake Whitney. We just went and started writing down where these things happened and then going. Actually, there are many more than listed on the Calendar… It is just that we don’t have all the info on those events right now… but as time goes by, we will fill them in.

If you fish in Aquilla Lake, you drive by one of the locations that we really love, The Peoria Opry, in Peoria, Texas. 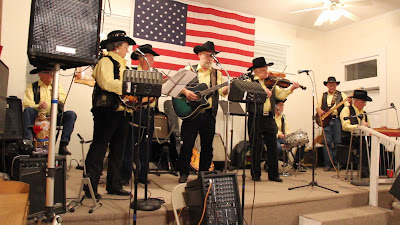 It’s right there behind the Hamburger and Bait shop, the best restaurant in town.

The fella doing the singing is Buck Hammond. He told me about starting in music along about 1992. He used to do a lot of fishing on Lake Whitney and put in at the McCown Valley Park ramp. He said that in the evenings sometimes when he came back to the ramp he would hear this music over in the park camping section. It turned out to be a bluegrass group that met there and played and sang. He said he started going to their jams and shows and really liked the music. He picked up the guitar and learned to play… I think he was a natural as he now plays a number of instruments and plays in several bands. A multi-talented guy… And he hasn’t asked me anything about fishing.. my guess is that he mastered that a long time ago.

And, by the way, The Boss is learning to sing and play the guitar…. I figure she will master it just like she did bass fishing… I’m getting used to it!

Anyway… If you are in the Whitney Lake area, maybe camping out overnight or visiting for a few days, you might want to check the calendar and map and see if there are any of these shows you would like to attend. We’ve found it to be family fun at a minimal cost!!!

Lake Whitney to remain closed for the 4th of July