Sunday was as “super” day on the lake…. great weather and pretty good fishing….  Today was a SUPER… SUPER DAY!   It started out in the 60’s this morning and got better.   It was about 70°, calm and few clouds when we left the lake.

We were on the water at 9:30 a.m.   A little late, but it was foggy this morning and after the fog it was very cloudy.   No point in hurrying down to the lake in the middle of winter when there is no sunshine.  I don’t like driving in the fog anyways.   The lake level remains at about 8 1/2 feet low.   The water is mildly stained to clear depending upon where you fish.  The water temperature Sunday was 55° and it started out about that today, but it did creep on up to 57° after lunch and after the sun came out… which didn’t happen until around 11 or 11:30.   There was little to no wind today… the flags along the road down to Whitney were hanging limp.

This is a fresh picture of the McCowan Valley Park ramp… looks just like it has for the past two months or so… good shape, even though only two of the three lanes are useable.  There were five other rigs on the ramp when we got there… pretty unusual for a week day.  We usually have the place to ourselves on a Tuesday. 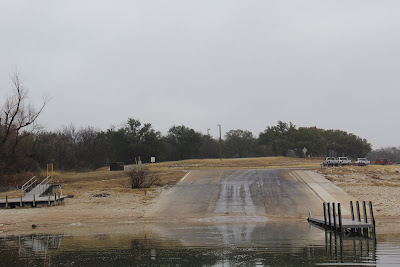 The Corps is not even having to move the ramp up or down…….   And, there is plenty of ramp there to launch any type of boat.   We did look at the ramp in the Cedron Creek Park.   That park will open the first of March, but just looking at the ramp, I am not sure you could launch a standard bass boat from it.  Maybe or Maybe not.   I know it is a much shorter and shallower ramp than the one at McCowan.   I would have to go back through my old pictures to see when it is actually out of the water.

Early on, the fishing was really tough.  No bites.  Actually, all day was pretty tough.  I think The Boss had 3 bites and I had one all day.   We fished top-water… just wishful thinking.. I had read some stories about frog fishing in the winter….  Did not work for me today.   The Boss fished some jerk bait and some Rattle Trap, with no results.  But, the old reliable came through…

Her first fish was a 3.52 pound fish…  I just hate when she casts right in the same spot I have just been and then drags out a fish. 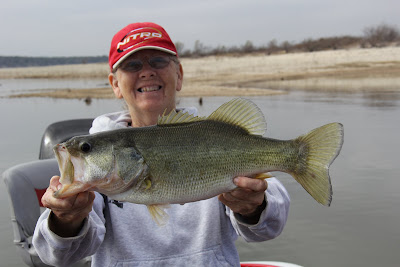 And, she is always so dang proud of herself too….    Some days she is hard to live with. 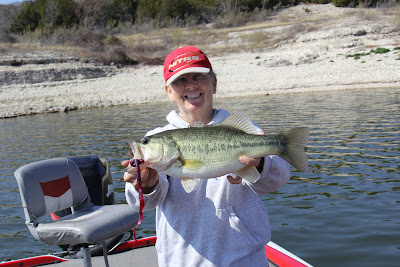 You can tell that the sun is out now…  It wasn’t too bad early on in the fog and clouds, it was just a bit damp.  The sunshine really made it nice.

I thought I was going to get skunked for sure…. I hadn’t had a bite all day.   But, finally I put this one in the boat. 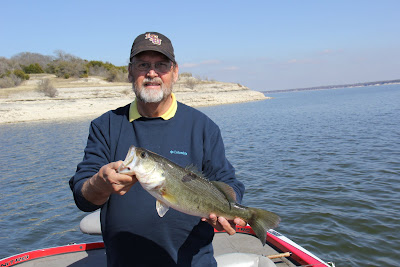 It was a 2.97.   Can you tell who can take the best pictures…  those last two fish are 3 pounders… but mine looks like a minnow compared to how her 3 pounder looked…..  Just the way it is.

I can tell you that the birds are back at the lake.  Lots of ducks, blue heron, and gulls.  We have seen the gulls actually working on the lake the last two times out.   There were 3 boats fishing for whites out in Cedron Creek today.   We also noted at least 3 other bass boats fishing as well..  It wasn’t quite like weekend boat traffic, but it was far more than usual. You just can’t beat a day like today for early in February.