Sometimes a cold wind blows a chill in my bones

I had checked the weather yesterday on the TV news and  www.weather.com and the wind was supposed to be 8 to 12 today…  Man, those “weather-guessers”!!!
I want to come back in my next life as a TV weather guy… be on television, make lots of money, and have a job where a fella can be wrong a bunch of the time and still have a job….  such a deal!

Anyway, we got up this morning kinda late.. just in time to watch Honey Hole on TV…   saw old Bill Wilcox snatching in some little ones in 20 something degree weather on Fork….  What I want are some of those rods he has that you can walk around on and don’t break or have the eyes break off…  🙂  …  Any…way I went down and got the paper and thought…  Hey, this isn’t so bad out here….  Not too cold and the wind is nearly nothing!

So, we hurriedly downed our coffee and some sausage biscuits, gathered up our stuff and headed to the lake…  We both put on all our winter gear…  that was a mistake, we were ready to pull it off by the time we got our rods out on the boat.

We were on the ramp at McCown by 9:30 a.m.  It was already close to 50° out there.   The parking lot was full again today….  We were LATE!  The wind was calm and the lake was slick.  There was no one to be seen anywhere on the lake, but there were 20 odd empty rigs in the parking lot. 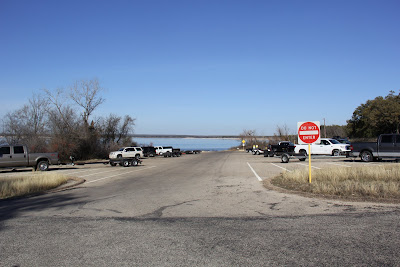 We boogied on over to one of our favorite spots…   I tried a suspended jerk bait while The Boss worked a worm….  We went about 20 yards and I hooked up with a pretty good fish..  in the 3 pound range I would guess.  Got it right to the boat and then it jumped and threw the lure…  It was the only bite I had on the jerk bait.    We worked our way around the point and I gave up on the jerk bait and went to the T-Rig.   Got another good bite on a deep drop off, but the line broke on the hook set…  Two missed in the first 30 to 45 minutes…  and I was getting more than a little paranoid about my hookups…  The first fish had barely been hooked in the lip and it had got away… It was pretty darn aggravating.

We fished up the creek working some secondary points that usually produce fish, and picked up one small one just about 11 a.m. 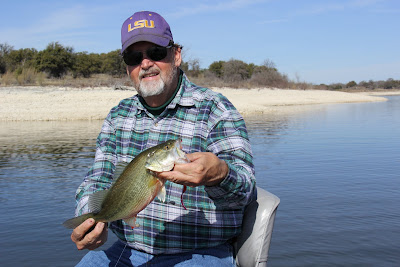 This one might have went a pound a half; a keeper anyway.

It was 11:30 so we stopped for lunch.  Good old Randy Brewer wraps.  A great way to have lunch … wraps, a few chips and a soft drink.   Then we fished back out of the creek, fishing a hump and then back to a point near where I had picked up the first one.

Another soft tap-tap and I put this 2 1/2 pounder in the boat. 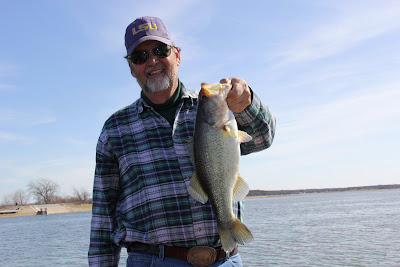 A nice little fish and I was feeling pretty good about the T-Rig.   We worked our way all the way back around the point, back to where we had caught a couple of nice fish last Saturday… but nothing.

The wind had begun to pick up a bit and I was thinking of putting that jacket back on.   We agreed to hit one more favorite spot and then head to the house.

We have a little flat we fish with some stumps and stickups right near a creek channel that often produces some good fish.   Two casts there today got me this 4.01 pound fish. 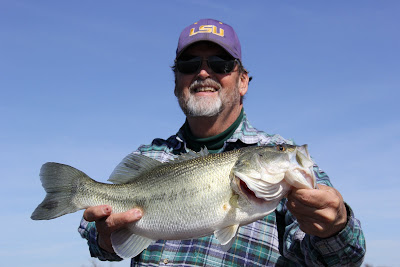 I felt pretty good about that last stop.   I had only made two or three casts when this fatty picked up the old Zoom worm….

The boss took a couple of pictures in her spare time….  this one of the Katy Bridge… looks like it is crossing dry land. 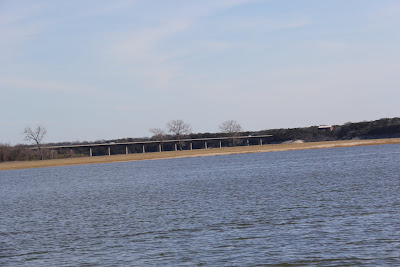 And this one of me with my patented worm technique….  actually she taught me this. 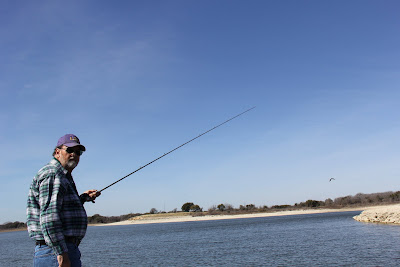 Actually, she was trying to take a picture of a bird and I stepped in the way….

The lake level today was 8.52 feet low… just about where it has been for the last 2 months at least.  Staying steady.  The water was stained to clear depending upon where you were fishing.  Stained on the wind blown shores, relatively clear in the calm areas.

The ramp at McCown continues to be in good shape.  No change there.

Just F-Y-I, The Boss did not get a bite today.   I managed to keep her end of the boat where she couldn’t fish…

For me, today was a DIAMOND…  for her, it was a bit of a stone.   Actually, she said it was a great day on the lake for a February day….  I think she came away somewhat happy.  I know I did.