That’s what The Boss was telling me on the way to the lake and on the way back….

I got up early this morning. I was wishing we were fishing! I went down and got the paper, cool, clear and relatively calm.. fishing weather. But, it was not happening. I had dropped the boat off at Charlie’s Outboard Repair in Alvarado yesterday about noon. I had to get that voltage problem checked out.. I didn’t like going to the lake and not knowing the status of the battery or the alternator or whatever. We had our chores lined out for today.. more yard work, etc.

But, as I was sitting outside with the dogs this morning about 8:30, I got a call from Keith over at Charlie’s. He had good news. They had put the computer on the boat and the problem was the gauge, not the battery, and not the $700 alternator. Terrific news. We went right over and picked it up. 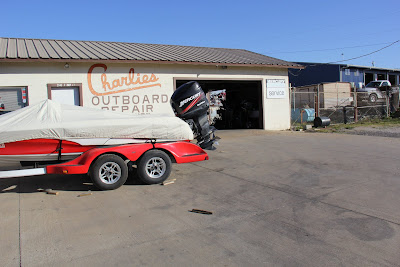 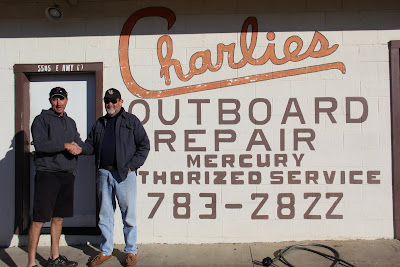 That’s Charlie’s son, Keith. He fixed us right up for a nominal fee. We couldn’t have been happier with the service and turnaround.

We headed to the house and re-loaded our gear in the boat. We were on the lake by about 11 a.m. The air temperature was still in the forties when we hit the water. The water temp was still 55° just as it had been on Saturday. The weather-guessers called it partly cloudy today, but I would describe it as more sunny than cloudy. The winds were probably 8 to 10 mph for the most part, but occasionally there was a gust that might have been 15 or so. The lake level is about the same at 524.48 as it has been. It is still 8 1/2 feet low. The water remains slightly stained to clear depending upon where you fish. The ramp at McCown remains in good shape… not nearly as crowded as it was Saturday.. only one other rig on the ramp today.

Because the wind was from the east (when the fish bite the least), we first tried the west side of the Katy Bridge rip-rap… nothing, nadda.. no bites. Then we headed over to Cedron Creek… I think it is one of The Boss’s favorite locations. It wasn’t long before I am hearing that familiar “Hold the boat! I’m getting a bite!” It was a bit windy on the point, but I did my best to hold the boat til she set the hook… and then the fight was on… Lots of jumping and splashing around by the fish.. Lots of yelling “Get the net!” by The Boss while she worked the fish behind the boat from one side to the other while I was trying to dig the net out, while trying to stay on the trolling motor and keep us off the rocky point…. 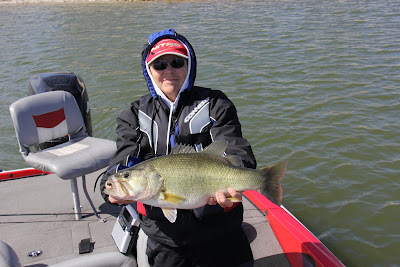 This fat old mama.. a 5.66 was safely in the boat… The Boss was a happy camper again.

Then, not long after, another “I’m getting a bite” from The Boss… 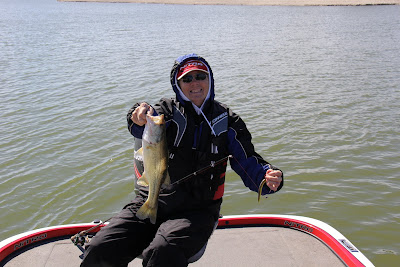 The wind picked up a bit… we ate lunch in a little cove out of the wind… then The Boss had another tap-tap and set the hook, but it ran under the boat and came unbuttoned… She wasn’t too happy with that.

We tried another location or two, but the wind was just getting over whelming… so we headed back to the ramp.. 2 p.m. We had 3 hours on the lake. The Boss had 3 bites and boated two fish that weight about 7 to 7 1/2 total… a good day for her. Me, I am not complaining.. I was very happy to get the boat back today… much better to be fishing than clearing brush along a fence row. I will figure out how to get the gauge replaced…

At the ramp we found three fellas cleaning fish. They were the folks in the other rig. They were running jugs in the river channel. They had 30 or so catfish, the largest was around 5 pounds…. They said that the catfish were really biting.. and that the cows were feeding!