Yep, we were on the lake again yesterday…. UP at 5:30 on the lake at 7 a.m. I think there were 4 or 5 rigs already on the water when we launched. It was a beautiful day, mostly sunny, 55° when we launched. The wind was light 2 to 5 mph most of the day. The water temperature was 60° to 61° everywhere we went. Toward the lower end of the lake, it was really clear, but it was slightly stained to stained in the backs of some of the creeks further up the lake. The lake level is 524.12 or 8 feet 10 1/2 inches low according to the TWDB web site. The ramp at McCown remains in fairly good shape. We had no trouble with the launch. We also saw a pickup and boat trailer on the ramp at Cedron Creek Park. The sliding boat dock is still out of the water there. Based upon what we have seen when the water was down, I don’t know if I would recommend using that ramp… but, who knows, maybe it is still in good shape. What I can tell you is that Cedron Creek Park opened yesterday morning and someone launched there.

What a sunrise it was yesterday. 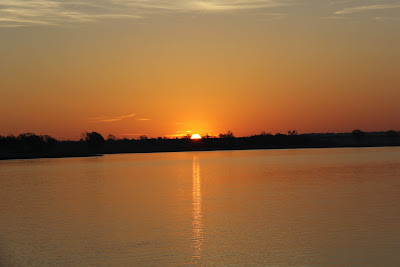 It just doesn’t get much better than that… unless of course you are boating a bunch of fish. We (I should say The Boss) didn’t boat a fish until 8:15. It was a small one and she followed up with a little larger one, maybe 2 pounds about 8:30. But, the bites were slow and hard to come by.. I only had one bite all day and it was a grab and run on a C-Rig late in the morning. I missed it of course. The Boss had better luck. She boated four fish total, the biggest (I think) was a 3.1 that was really hungry. 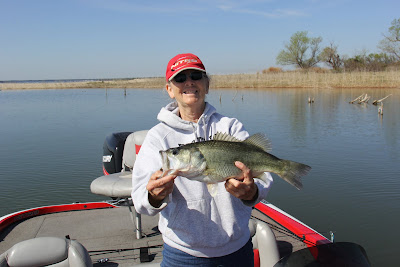 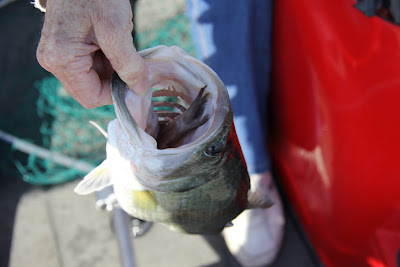 I don’t know if that was a shad or a bluegill in its mouth, but obviously it was eating and wanted more. What a pig. And, there is no point in trying to figure out where she was… she vacuumed all those stumps and I am positive there are no fish left around them.

For the first time we saw a number of birds working on the lake. And there were an appropriate number of white and striper fishermen out working the locations where the birds were, especially down near the end of Bee Bluffs. And, there were lots of carp and gar floating around. We visited with two guys who were bow fishing for carp and gar. They had a boat load and were having no trouble finding easy targets along the bank. We saw them boat some monsters in just the few minutes while they worked their way around us. One of the gar was just huge, 3 1/3 to 4 feet long and “big around as his leg” as the guy said. It took him a bit to put it in the boat. They can take all those they want for my part. In fact, the coves on the lower end of Bee Bluffs had dozens of carp floating in schools in the clear water… made you wonder if there were any other fish in the lake there were so many. We also noted lots of schools of shad working around the shore line. Occasionally we would see a fish strike in them, but generally it did not seem like there were any stripers, whites or black bass working those shad in the shallow water. The bow fishing guys said that it was the carp that were running the shad along the bank. They would have been in a position to know because they were fishing right on the bank with their boat.

Any way, this is a shot of another fish The Boss caught down that way. 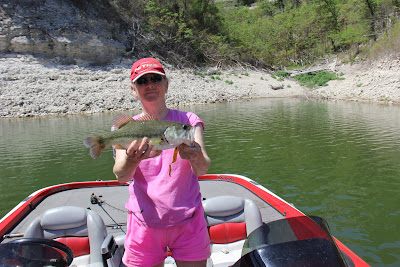 As you can see, it had warmed up a bit and The Boss had shed her coat and jeans for shorts and a T-shirt. It was likely around 80° by mid afternoon.

Every time she put a fish in the boat, I changed worm colors to match hers… and every time I looked, she had a different color… I donno…. she just kept using different colors… things were so easy when she only fished T-rigs and one of those Old Monster Zooms in plum….

We met up with Charlotte and a couple of other guys over near Bee Bluff. They were laughing talking and having a big time. But, they had got a late start and had only been on the water since 11 a.m. or so and they wanted to get on with their bassin’. They said they had already fished their honey hole where they caught 50 plus fish last week including a 9 plus fish. Charlotte allowed that she had caught at least 25 of those fish. She was running the trolling motor and working hard at putting some fish in the boat.

Actually, I needed a nap, but since the Boss was so far ahead of me, I just tried to keep fishing… didn’t do any good though, I still didn’t catch a fish. I think she has some secret sauce she is putting on her lures back there. She worked that old T-Rig all day. I fished top water, crank bait, T-Rig, C-Rig and some others… I had rods all over the front of the boat by the time we quit..

I also received an email from Arthur Garland who said that he had fished the Bud Light Tournament Saturday. He reported that they had caught about 20 fish on Saturday, but their biggest had only been about 3 pounds. And, he reported that he fished yesterday (Monday). He said:

I went out today and caught a 5 1/2 and a 4 in the first thirty minutes. Finished with best five a little over 18 pounds.

Well, I don’t know where he fished or what he caught them on, but we didn’t see his green and gold Legend out on the lake. 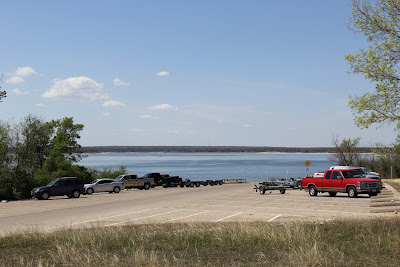 This was McCown ramp when we returned about 3:30 or 4. There were 10 rigs on the ramp. So there was some fishing going on. As you can see the wind was still down and the lake calm…. Lots of sunshine. What a terrific day on the lake.

We should have gone back this morning, but the weather is a bit unpredictable.