What a great day on the lake it was yesterday….

The winds were less than 5 mph, mostly 2 to 3 mph. that put just a light ripple on the water. The sky was bright blue with a few puffy white clouds.. Lots of sunshine.

It was cold when we hit the lake about 8:30 a.m. I think it was about 47° air temperature and the water temperature was 57° and stayed that way until we left around 1 p.m. The lake was up a little bit. According to TWDB the lake level was 524.25 or 8 feet 9 inches low. On Monday, the stats said it was 8 feet 10 1/2 inches low a difference of an inch and a half. But, according to the stumps we fish mid-lake, the water level was up about 3 or 4 inches… I know this because on Monday, one stump in particular that I fish had been about 3 inches out of the water and yesterday it was under water by an inch or so… So who knows… I can tell you I think the water is up. In the creeks, it was somewhat stained; the main lake was still clear. The ramp at McCown remains in good shape. We saw no one using the ramp at Cedron Creek Park, though there were a few campers in the park.

As opposed to Monday, there were few birds working mid-lake and we found no shad working along the banks.

Although the temperature according to WBAP was about 50°, it seemed really cool to us. We fished the north shores to stay out of the breeze and in the slick water, but it was still cool.

We fished hard and the bites were soft. I think I only had one fish really pull, but the rest seemed to just pick it up and then sit there. The Boss said her bites were light as well.

There were only 2 rigs on the ramp when we launched (both pontoon boats), and we noted that all the boats on the lake (as far as we could see) were concentrated in one spot and they were likely fishing for whites and stripers, or maybe crappie. They were fishing a location that I believe has some standing trees out in the lake. 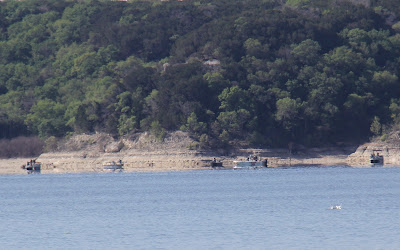 There were actually 7 boats in this location though you can only see 5.

I fished a crank bait, and a T-rig. The Boss only fished a T-rig. Most of the bites came on an off-colored green-brown worm that she found in the bottom of her lure locker. Sometime around lunch The Boss boated this fish. Not much, but some is better than none… and I can vouch for that since I had none and she had the big smile. 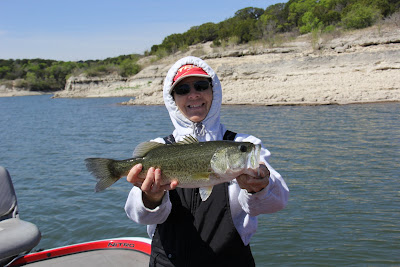 There were 7 or 8 rigs on the ramp when we left. It had warmed up about 10 degrees to about 60° to 61° and was really nice. I am sure that some of those folks went out and caught fish. And, if they didn’t they had just a great day like we did.

There is nothing more relaxing that a day worm fishing.

It was windy this morning and we had other commitments any way…. so we didn’t fish today. My hat is off to those who braved the winds. We will wait and hope they settle down some and then go back out… maybe we will cave and go to Aquilla.. I know spring fishing on Aquilla is good.. that is when the water is near pool level which it is not now.