After being penned up for a week or more … or a self imposed hiatus from fishing because of the winds lately, The Boss and I were ready to get back on the lake today. We waited until we were sure the wind would be down some and the clouds were not going to turn to thunderstorms…. And one could easily say that we were overly conservative. In hindsight, it looks like we could have been on the lake at daylight.

We didn’t hit the lake until 11:30 a.m. Bankers would even be ashamed of those kind of hours. The air temperature was about 70, it was partly sunny… (being optimistic here.. the glass is half full, that sort of thing). The wind was 9 to 12 (in the gusts it was 12 or so). It is spring time, the weeds are green, the trees are green.. it is very nice outside. What more can a person ask other than to be on the lake. The wind was out of the North to Northeast, so we hunted some areas that were along the north shore line… somewhat out of the wind. We saw a boat or two in our favorite spot so we headed to the Bee Bluff area… definitely a sheltered area. And, no one else wanted to fish a barren shore line. The lake level is 524.15 or about 8 feet, 10 1/4 inches low… right where it has been hovering for the last several months.. In that 8 to 9 feet low area. The water temperature was 65 or so degrees… give or take one or two degrees depending upon where you were.. that is deep or shallow.

We had an exciting start to the day… I thought I would throw a classic Rattling Rogue for a while… so I dug out a 1970’s model that I keep in the tackle box just for grins. It is a floater and I can keep it in the strike zone a long time.. just jiggling it. We didn’t go 20 yards down the bank until I had a good tug. I set the hook and a fat, four foot gar leaped out of the water trying to imitate one of those ocean sail fish… Fortunately, when it came down, it smacked that Rouge right out of its mouth…. I was pretty happy about that because my second thought had been… “How am I going to get this thing off?” I don’t have to tell you the first thought I had when I saw it…. I was looking like the preverbal deer in the headlights when it went sailing.
Then we didn’t go another 20 yards before The Boss stood up and said “I have a bite”… she set the hook and that old All Star rod bent double…. after a minute or two she had it within a few yards of the boat… Then it became clear that it was a big carp…. She couldn’t shake it off… so I had to net it and get her bullfrog back… Here are a few photos of the fun she had with the carp. 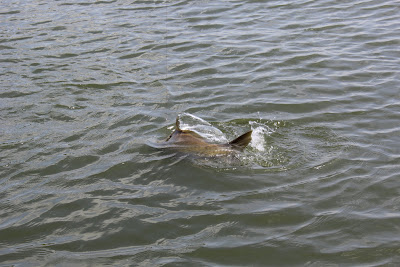 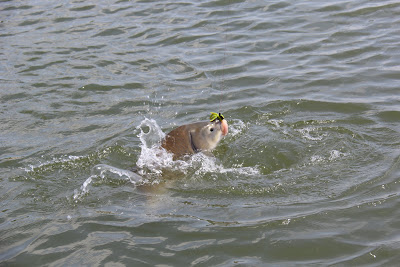 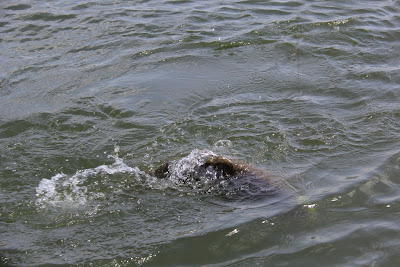 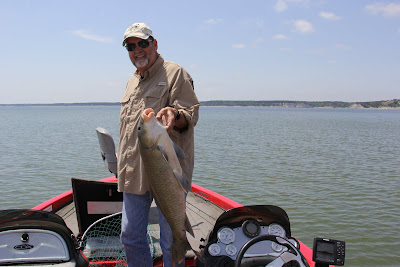 It was pretty tough sledding after that. We both had some bites, but we had a hard time getting them to hook up.

I got one in the boat and let another one get off when I tried to be Bill Wilcox and lift it by hand into the boat.. Man, the net was right there too… I saw a couple of guys get a laugh out of my letting it jump off …. Here is the one I did get into the boat.. it was a 2.7 pound fish. The gar had messed up my Rogue and I went to a traditional broken Rebel…. and it caught me this bass….. It has been several coon’s ages since I caught a bass on a classic Rebel. 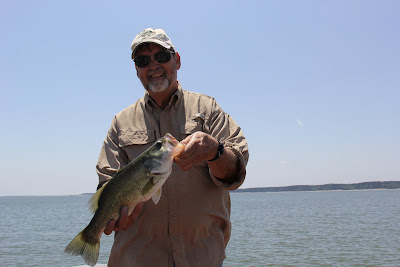 There were several spots where we got more than one bite, and had fish on but they came unbuttoned. We just did not get good hookups today.

We did notice that the Corps of Engineers had put the sliding dock in the water at Cedron Creek Park and it looks like the ramp is fully functional. I had been hesitant to say that because I know the ramp is not as deep as the McCown Valley Park ramp and the dock had been out of the water. But, on the surface now it looks like it is fully operational. 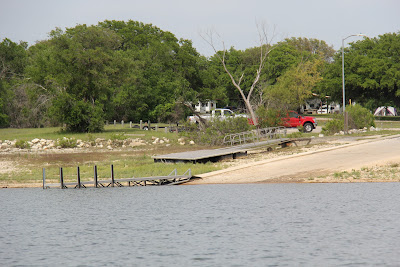 There were about 6 or 8 rigs in the McCown boat ramp park when we launched at noon, but the parking lot had begun to fill up when we left at 4:30. 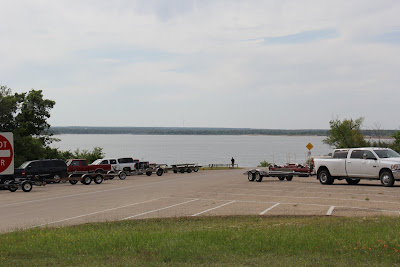 All in all, it was a good day on the lake. The McCown Valley Park and the Cedron Creek Park were less than half full… maybe 20% if I had to guess. The parks are green, green, green. The weather is just great. The fishing isn’t bad. I think if we had been there early on, we would have caught some fish.