We were up early and got to the lake by 6:45 about 15 minutes after sun-up. It was about 55 or 60 degrees and clear…. It was another Willie Nelson Un-Cloudy Day. I thought the winds were going to be 10 or so today, marginal for us and they were “light” when we got on the water. The water temperature was 68 to 70 degrees depending upon where we were and it was reasonably clear where we fished… it was easy to see lots of fish along the shore line along with lots of shad working. There was no one else on the McCown Valley ramp when we left the ramp. We had the parking lot and that part of the lake to ourselves. As we came across the lake we could see a boat (I think he launched in Cedron Creek Park) in the mouth of Cedron Creek fishing one our favorite points so we headed up toward Bee Bluffs where we immediately spotted a huge flock of gulls working along the bluffs. We ddn’t get there before the guy from Cedron Creek passed us from behind and went further up in the gulls. It didn’t matter though… we were the only two boats in the area and there was a large area of shore line where the gulls were working.

We hit the crank baits… The Boss was throwing a Rattle Trap and I threw a 6 to 8 foot diving bait. We were putting big whites in the boat on just about every throw for a while. Here are some of the pictures…. I made it a point to get some today. We weren’t going to keep the fish so we might as well share the fun with you all. 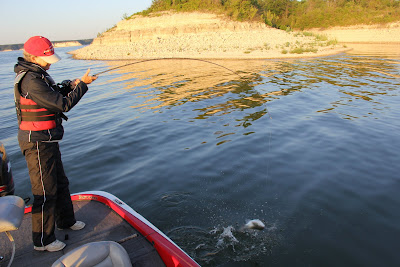 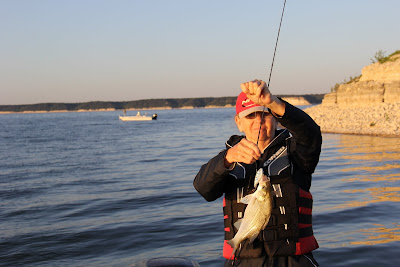 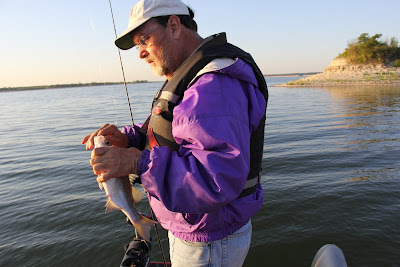 We quickly got tired of the crank baits as we saw some of the fish hitting on the surface and some looked to be bass so we started throwing top-water lures. That seemed to suit the fish just fine. We caught as many with top-water as we did with the crank baits…. And, I picked up a nice bass as well. The Boss hooked up with a black as well, but lost it at the boat. She said she was counting it anyway since we weren’t keeping. 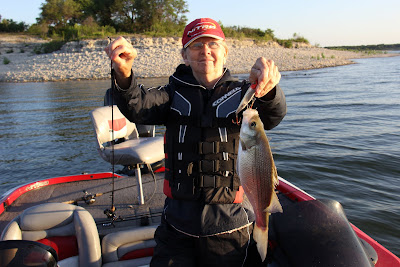 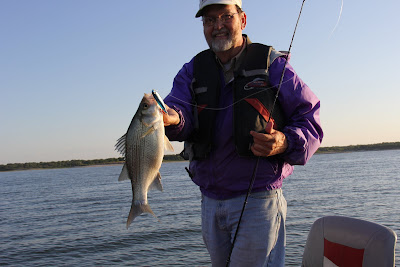 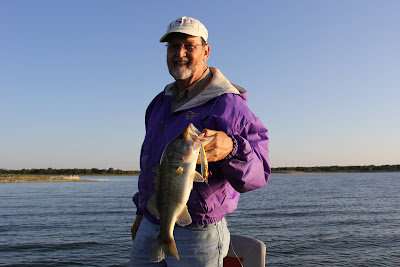 The action stopped a little before 8 a.m. We had a good 30 to 45 minutes of “catching” and it was great fun. We fished some of our other favorite spots in Cedron Creek but the wind got up and by the time we got to the point we originally wanted to fish, the wind was far greater than 10 mph so we gave up Cedron Creek and went down to Cedar Creek / Juniper Cove for a while. 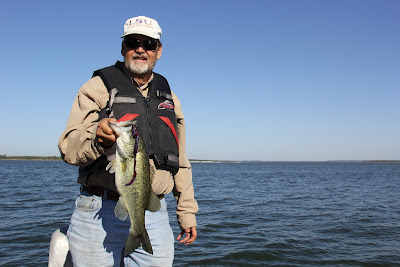 I picked up this nice little 2 1/2 pounder on a point down there. But the wind seemed to come from every direction so we just gave it up and came on in. We were off the water at 11 a.m. We had fished 4 hours. We had 2 boated bass (3 if you count the one The Boss shook off at the boat) and probably two dozen big whites. We were disappointed that we haven’t found any stripers mixed in with the whites and blacks on the points chasing shad. In past years, that pattern has worked well for all three varieties.