We fished yesterday. We were a little late getting to the ramp… I think it was around 7:15 when we got there. The Parking lot was already nearly full. 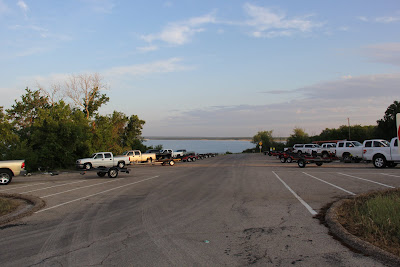 It was 65 or so and supposed to be partly cloudy. We had rain the night before. But, what you see in the picture was as cloudy as it got. By the time we were on the water good, the clouds had disappeared. The winds were also supposed be “light” from the northeast. They were more like 10 to 15 and from the east… you know, how that is: Winds from the East, the fish bit the least. And that proved to be true. The water temperature was a solid 68°. The main lake seemed to be murky or very stained. The water back up in Cedron Creek remained clear…. just what we saw, can’t explain it.

We fished top-water, crank baits and T-rigs. I think we had two or three bites on T-Rigs (or The Boss did), I had two strikes on a top water, one of which was probably a big gar. We boated no fish. We fished Bee Bluffs just to get out the wind. We were off the water at 11:00 a.m. So we got in 3 1/2 hours of fishing… no catching. It was white-capping when we came back across the lake.

We ran into our friend Marschall over in Bee Cove. He said that he and his partner had fished Juniper Cove and that it was “muddy” and that they had caught nothing there. They had picked up two small bass on spinner baits along the south bank between Juniper Cove and the Katy Bridge. We also visited with two fellas over in Cedron Creek. They said they had caught nothing as well. Weather change, the fish had a headache, who knows, but we didn’t find them biting. And the wind was too much to make it pleasant to fish.

We received this photo from Jim and Pam this past week. They fish Whitney a lot and this was her first black bass to boat… 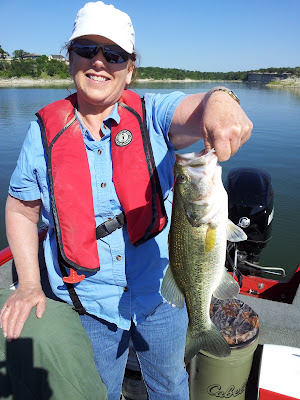 And on another note, Gordon Stauffer at Media Bass said they are considering moving the Media Bass Tournament on Whitney from May 19 to May 26. This is the info he sent:

Notice: May 19 at Whitney possibly moved to May 26

A decision will be made on May 15 to move the May 19 Teams
to Sunday, May 26 on Lake Whitney (Lofer’s Bend Park).
Media Bass wishes to help the town of West and all efforts made to do so.

An announcement will be made by email and on the website at that time.
I welcome your thoughts about this possible change of schedule.

The Bohemian Tournament is next weekend. Don’t forget the silent auction, the proceeds go to the folks in West.