We came out of the early service at Cowboy Church this morning and our buddy Keith Jones was talking fishing.. the weather was great and the wind was down for the first time in days… or at least tolerable. He was telling about winning the Working Man’s tournament last Tuesday on Pat Cleburne… and having big bass.. a 5 something… (sorry Keith I forgot, maybe a 5 1/2). And he was giving us some good tips on what he has been catching them on…. square bill crank baits. This is the same thing that a fellow on Whitney told us last Sunday… crank baits… get it through your thick head.. crank baits.

We got to the lake about 11:15 a.m. and were on the water by 11:30.. The lake level is 523.99 or just a little over 9 feet low. That is 2 inches lower than it was last weekend… its dropping, but hopefully not to fast. Man we need a good rain.. soaking for about 3 or 4 days. There is some forecast for later this next week, but you know how that goes… the weather-liars.. they get paid whether they are right or wrong… Anyway, it was about 50 to 55 degrees when we launched and it likely warmed to around 65 or 70 by the time we left at 5:15 p.m. We had a hard 6 hours on the lake today… The winds were about 8 to 12 mph from the north and north west… The water temperature was 65° and was relatively clear to stained. There were few clouds in the sky when we launched and by late afternoon, there were none.

The ramp at McCown Valley Park remains in good shape. In fact, I think the Corps has done a little work on that ramp, removing some of the gravel that had built up at the water’s edge… but again, that could just be my imagination. Anyway, the sliding boat dock is in good shape, both there and at Cedron Creek Park. We also saw folks launching at Cedron Creek Park ramp as well. 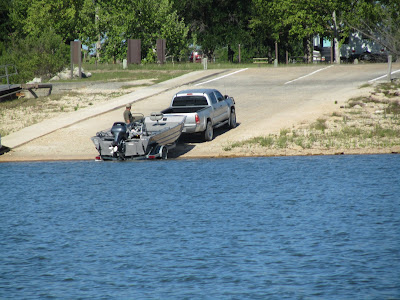 What’s wrong with that picture… well, the guy nearly put his boat in with it still strapped to trailer… but he caught it….

We fished for 6 hours.. we had a few bites… we might have actually got our “5” bites for the day… but we only boated 3 fish. The Boss caught this 3.3 pound black on at T-rig. For you folks down in Rio Vista, that is 3 pounds and about 5 ounces… or a little over 3 1/4 pounds. Just kidding…. don’t take it seriously… 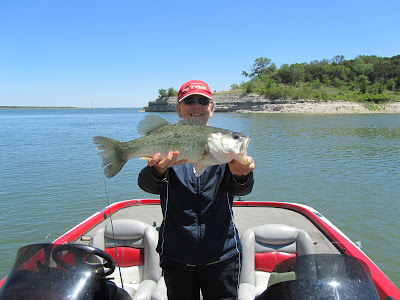 That was big bass for the day. I took Keith’s advice and chunked a crank bait some… well actually I waited until I saw this fish jump… 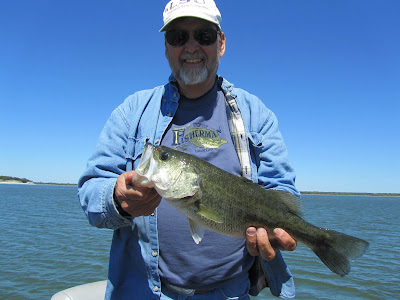 I was really happy to get this fish… It had been a while since The Boss had caught hers and I thought I was going to get skunked. I did continue to throw the crank bait after catching this one. While I might have had another bump or two with it, I didn’t hook up with any. I had mostly threw my broken Rebel and a T-Rig up until that point.

We fished really slow and covered the water we fished very thoroughly. We left no stickup or rock untouched.

The Boss did boat another fish… It wasn’t quite as big as the first one, but it was still a keeper.. in fact, all three fish we caught were keepers. 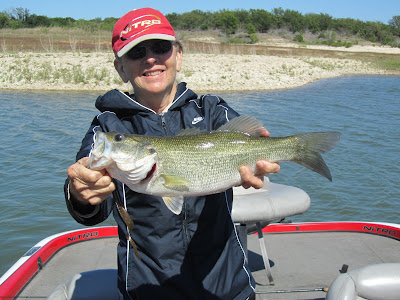 One of the times we were out in the last couple of weeks, we came across a couple of guys who were bow fishing.. they were loading the boat with carp and gar. I was kind of curious what bow fishermen did with their catches… Well we don’t know what all those guys do with their fish.. but we did find some of them… 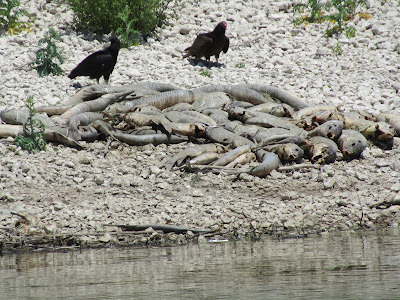 There were some pretty scenes out on the lake though. Here are a few pictures we took of the flowers and such. 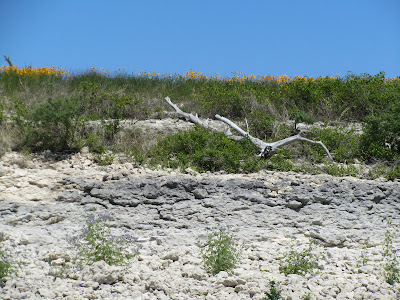 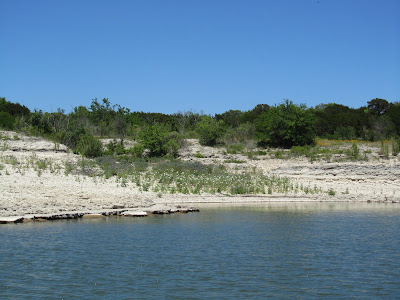 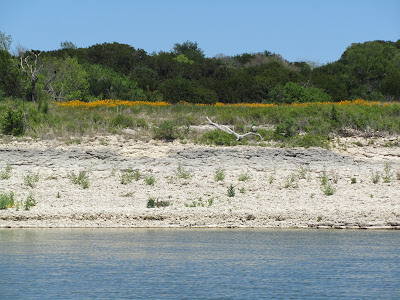 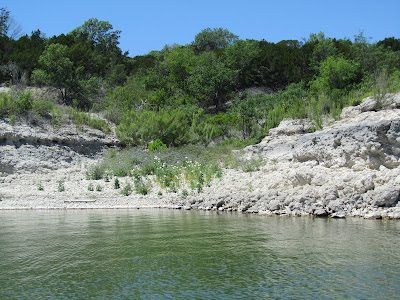 It was a great day on the lake… We really enjoyed the water and the sunshine.

My buddy Scott in Alabama sold me a Lowrance 332c that he was replacing. It hooked right up on the trolling motor with the existing connections I had. The sonar was great.. I really enjoyed the color versus the black and white I was getting from my Lowerance X125. The 332 has a GPS in it, but I couldn’t figure it out.. Will have to read the manual some more or get some advice from someone who has one. I put a Navionics Hot Map in it, the one I had in my Hummingbird that I have on the console, but it didn’t work either. The map would come up, but it was zoomed to far out and the location didn’t seem to change from a spot near the Katy Bridge… the map would not zoom at all.. and the coordinates would not change. I don’t know if there was an operator problem or an issue with the box. Like most computer stuff, it may take me a year to sort it out.. unless someone comes along and helps me out.

Anyway, it was a great day on the lake for The Boss and I. She beat me again.. she had two fish, both on T-rigs and she had “big bass” with the 3.3 pound fish. At least I didn’t get skunked and the day came off great…without a mechanical hitch of any kind.

If you are out on the lake and want to say “Hello”, just stop by if you see us… This afternoon we pretty much had the lake to ourselves and most folks had left the parks by late afternoon…. lots of good spots left for the campers.