We were up at 4:30 this morning….  I  fed the dogs their treats and checked the weather… wind was down early, about 70°, sunshine… Our kind of day.

I put the coffee on and woke The Boss.  By 5:05 we were on the road to Whitney…  coffee and sausage biscuits in hand.

At 6:15 we were launching.  There were two boats at the dock, a striper boat which looked to be waiting on someone nd Don Lewis who had just put in and then made a run to rest room.  Don gave us a shout out and a wave.  … Preciated.

We headed back to the sweet spot we had Friday….  but, today was Monday not Friday.  There were no shad running and no bass busting them this morning… Fish were clearly not as active as they had been on Friday morning.   We fished the top waters hard for 45 minutes and had two small fish. 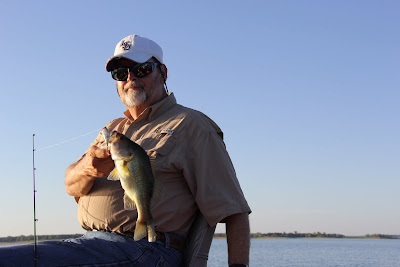 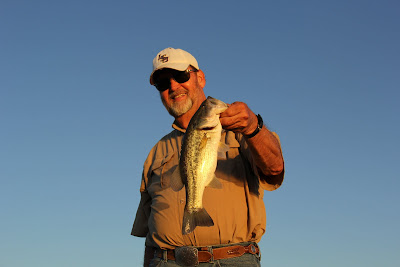 They maybe went a pound or so each…  small.  The Boss and I might have had one or two bites each on a T-Rig, but neither of us were able to hook up a fish.

No shad, no bass.  I had had an email from David Stair about his fishing trip on Friday.  No fish Friday afternoon he reported and he had fished the same areas we fished on Friday morning.  Same story as today.  No shad running Friday afternoon.

I don’t know where Don Lewis was headed this morning, didn’t visit with him again after we saw him at the ramp.  I think he was still out when we came in at 9:30.  The wind had picked up some as forecast, it was getting hot and we had no fish.  Tough day, not to mention that I broke my prescription sun glasses…  replacing those have now been added to my to-do list.  Along with replacing the head lamp assembly on the pickup after hitting a buzzard that was slow to get off the highway to Blum on Friday when we came home….  always something.  Life is an adventure.

But, it was a beautiful day today… not a cloud in the sky, the winds were light for a while.  The water temperature is close to 80°.   There were still a fairly large number of folks camped out in McCown and Cedron Creek Park.  I’ll bet the camping was great over the weekend.   The lake is visibly dropping.   The current level is 524.05 or 8 feet and about 11 1/2 inches down.  The lake remains relatively clear.  The ramp at McCown remains in good shape.  I also saw a rig on the Cedron Creek parking lot so I believe it is still open.

There were 4 or 5 other rigs on the ramp today and we saw several boats on the lake.  All the folks we noted on the lake were fishing for white bass in the Cedron Creek area, and a couple on the humps down near the south end of Bee Bluffs.

Some days are diamonds… some days are stones…  It wasn’t a complete water-haul today, but it wasn’t that grand either…  as the old saying goes… any day on the lake beats working.