The wind was “light” this morning…  We were up and at them early… 4:30 a.m. The Boss is fixing us some sausage biscuits, I am loading up the ice chest and rounding up sun glasses, applying sun screen and such.   The dogs are looking for their morning “cheese treat.”

We rolled into McCown Park at 6:03 a.m. and were on the water by 6:15.  The air temperature was 76°, the water temperature was 86°.  Winds were light and it was partly cloudy and very hazy.   The Whitney Lake level is 523.84 about 9 feet 2 inches below pool level.  The lake has been relatively stable, staying at this level since at least the first of the year.   The ramp at McCown remains in good shape, the Corp’s sliding boat dock is working great. Here are a couple of shots from the McCown ramp area. 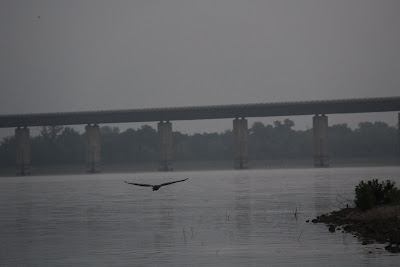 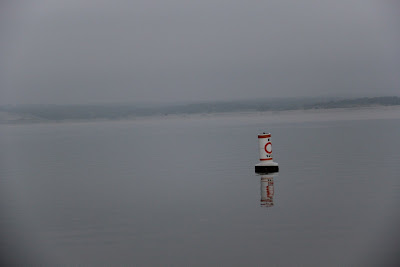 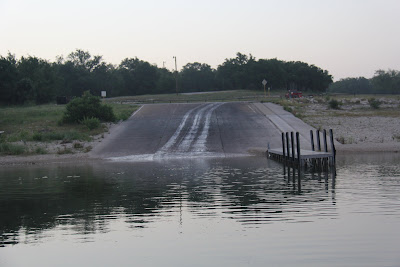 I came down the ramp and out onto the dock as The Boss eased the boat back up to the dock to pick me up and just as I got to the end of the dock, she screams “SNAKE!”   It was all I could do to keep from jumping off the dock.   As I am looking around to see if this thing is on the dock or what, she points it out in the water just off the end of the dock.  It a water rattler about 3 or 4 foot long.  Fortunately, I didn’t have to change my britches or make a run up to the rest room and I was able to get into the boat with ease.  But, that was better than a strong cup of coffee.. it got my blood pumping for sure.

We made the run over to Cedron Creek and fished a couple of our favorite spots without any luck.  We may have had a bite or two, but it was hard to tell for sure.  About a quarter til 8, The Boss boated her first fish.  Not long after that she had another small one. 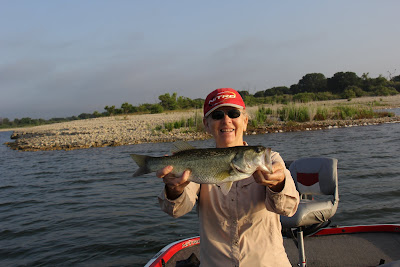 The second fish was smaller than the first.

The wind picked up a little, just enough to make running the trolling motor feel like work, so we decided to move to the other side of the lake since the wind was from the south, southeast. We made the run up to Cedar Creek. The first cast on one of our favorite points there got me this 3 lb 9 oz feisty fish. 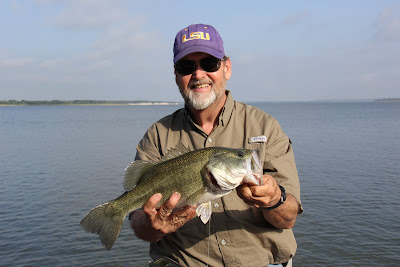 It was 9 a.m. when I got this one in the boat. We fished for another hour and a half but didn’t get another hook up. I did get a couple of nice taps in some stickups off a creek channel, but was not able to get a hook set on any of them.

I don’t know how hot it was by then, but it seemed fairly warm … an the fish were doing nothing so we headed to the ramp.

We generally had the lake to ourselves today. There was no one on the ramp when we launched and only two boat trailers there when we returned. One was a ski rig and the other was an airboat. We did see a pontoon rig and a ski rig launch at Cedron Creek Park and head up the lake. But those were the only boats we noted. We could have fished any where we wanted and not run into anyone.

A couple of times we saw bass busting shad, but the fish were up only for a second and they didn’t like the top water or crank baits we threw at them.  The Boss caught her biggest fish on the normal H2O top water, and the other on a T-Rig.  My fish came on a T-Rig, but he hit the worm as soon as it hit the water and he swallowed it.  I think he would have bit anything that I had thrown.  He was feeding and ready.. just a lucky shot.

All in all, we had a good day.  No issues on the trip down or coming back and no issues with the boat.  We had a good burger at the Sonic and headed on back home.  We got to listen to Rush most of the way back.