The McCown Valley Park and the Cedron Creek Park were all but empty this morning… Strange!  The 4th of July is usually a big day on Whitney.  In fact, it has been years since we would even go to Whitney on the 4th or the 4th of July weekend because of the crowds.   This morning we were the 3rd rig on the McCown boat ramp at 6:12 a.m.   Two other rigs were just launching and taking off.  The air temperature was an unheard of  61° on the 3rd of July!   The water temperature was a solid 82°.  The water is very clear for Whitney.  The lake level is 522.97 or 10.03 feet low.   The water is dropping pretty quickly I would say.  It looks like about 2 inches in three days.  The skies were a little hazy this morning but eventually turned cloudless.  The wind was zero to one or two miles per hour; nearly calm and then they were calm by about 11 a.m.  The ramp at McCown continues to be good, but I would use the middle lane of the ramp since it is getting very shallow in the little cove you might also watch the step down from the boat dock to the boat… That first step can be a killer.

I fished a deep diving crank bait this morning because I hadn’t fished one on Monday and I fished a buzz bait a little.  But, there was not , much movement on the lake.  We saw a few instances of one or two shad flipping and running from something, but really did not see any fish breaking.  There were a few birds along the shore, but very few in the area that we fished.  We fished shallow stumps and rocky points.  We fished deep humps and deep points as well as ledges on creek channels.  We did not find any concentration of fish other than out in the main lake river channel and those fish appeared to be whites and stripers.

Here are the two fish we picked up: 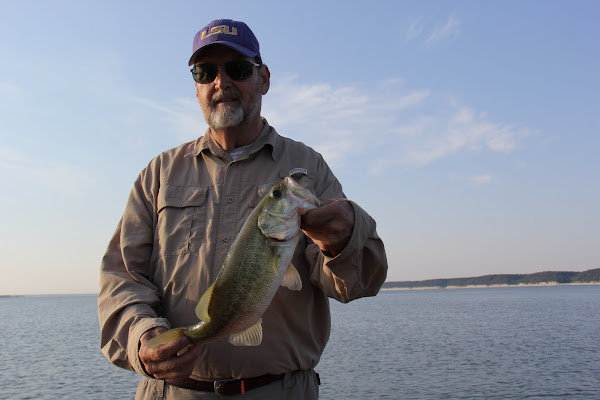 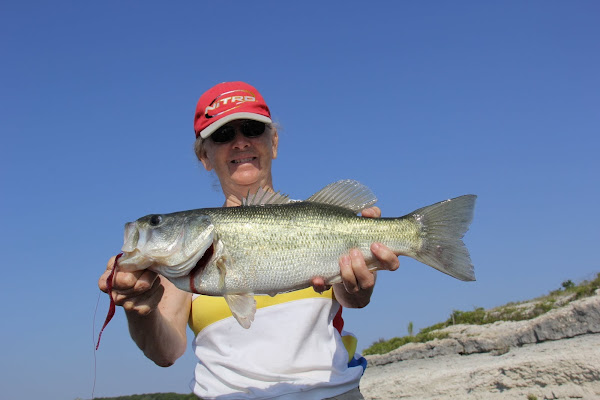 The Boss woke me from a great nap to get the net for her on this one.

We fished for about 3 1/2 hours. It was very comfortable on the lake. We only saw one or two other boats, and there were only 3 rigs on the ramp when we pulled out. Two of those were ski boats that were just launching as we came in.

We were surprised that the parks were not just overflowing with folks. The camping weather has been great since Sunday, very cool nights and light winds. The lake itself is warm. It should be a great 4th of July weekend for those that get down to the lake.