Haven’t posted a fishing report lately.  Haven’t had any really good stuff to pass on.

But here are a few tidbits, hints, stories, whatever…

My son Joe and I fished last Saturday. We zeroed.

The ramp at McCown Valley Park was still in good shape.  Boat activity at the ramp was light.  There were only a couple of rigs on the ramp when we launched and about a half dozen when we left.

We saw no shad activity nor any bird movement. Not good signs.   We fished main lake points and some secondary points and some creeks.  We fished T-rig, C-rig, crank bait and some top water.  We had fewer than a half dozen bites on worms.  In two cases the worm was either stripped from the hook or bit off right behind the hook.  The bites we got were for the most part light and they were not taking the worms.

While we didn’t catch any fish, we had a great time “catching up” on life.  Not much better than a day on the lake with your son.  Life is good.

Sunday at the Cowboy Church, The Boss and I got to visit with Keith Jones, the lure guy.  He had fished Whitney on the previous Thursday.  He said he put in at Cedar Creek Park and that the ramp there was still in good shape. It is only a two lane ramp and because of the sliding dock, only one lane is useable.  Keith advised that he had fished Bear Creek.  He said the water was low there and you had to stay in the middle of the creek for the most part.  But, he was flipping wood… stick-ups and brush with a jig.  He boated 3 fish, the largest being about 3 pounds.   He also had a great story to tell about “the one that got away.”    He said he lost a “heavy” fish in a bush.  He had flipped a jig into a bush in shallow water and the fish had bit instantly.  He had a tough time getting it out of that bush but did, then it ran into a second one and broke off.  Keith thought the fish would go 4 to 5 pounds.  I like Keith’s fishing stories.

I also received an email yesterday from Jacob Stanford  who also been fishing on Whitney.   Jacob said he caught this one ” flipping and pitching some docks around Juniper Cove.”  Check out that picture for location landmarks..   Just kidding Jacob.  I have already studied the picture and know right where you were. 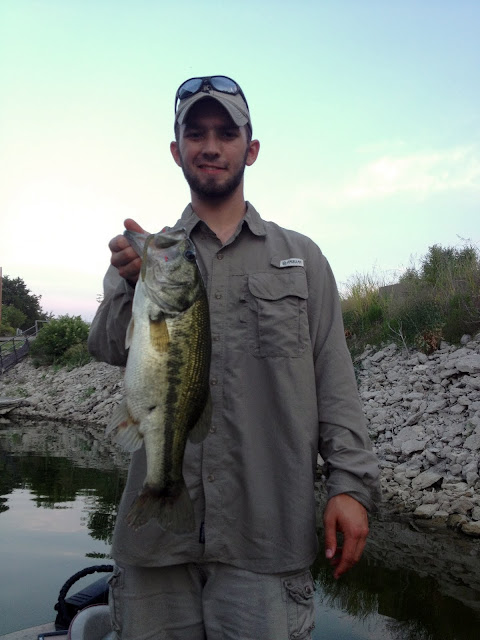 We appreciate Jacob sending this in….

This is Texas Parks and Wildlife’s latest bass fishing report on Lake Whitney:

Yes Dorthy, there are still some fish in Whitney.  You just have to find them.  We haven’t found them lately.  I wish TPWD would give us some lake maps with GPS locations on them for this “good” fishing.

Actually, how the fish move around in Whitney can be a big puzzle.  I know from my own experience that big fish can be caught in bunches at Whitney.  My favorite method for catching a good mess of fish is that when we catch one, we fish that location to death because where there is one, there are more.  And where there are little ones, there are big ones.  You just have to find them and then you will find them in bunches.