We were back at the lake again today….

When we got up this morning around 5:30 a.m. it was clear and calm. I went down to get the paper and said to myself, I should be headed to the lake. I came back in and checked the weather on TV and the Internet. FOGGY was the current word for the area….Lifting at 11 a.m was the prediction. HUH??? No fog outside. Well we had breakfast and I made a run out to the freeway. Still no fog. I figured those weather-guessers had something else in their Cherrios again or was it their Wheaties… At any rate, I thought they must be looking at the world through some colored glasses or something… Maybe heavy duty shades in a dark grey.

So, after consulting with The Boss, we loaded up and headed to the lake. Whatever fog there was out there was supposed to burn off by 9 or 10. It was already 8 a.m. when we left the house. Got to McCown about 9 a.m. And that fog, well there was plenty of fog. By the time we got out of Cleburne, we were in it up to our necks. It was a slow and easy ride down to Whitney. When we got to the ramp, you couldn’t see the lake from the top of the ramp. It was dense! There was one other rig on the ramp, and then suddenly out of the fog another pickup rose from the bottom of the ramp. A small surprise! Never saw it until it was right on us.

Since we are equipped with a Hummingbird fish finder with a GPS and Navionics map, we were not deterred. The Boss did make it a point not to get to far from the dock and the ramp while she waited on me to park the truck. Just a note here. The ramp at McCown is still good. We launched with no issues and the dock is still in the water and it is not a big step from the dock to the boat. The lake level is 521.54, same as it was last week, about 11 1/2 feet low. I climbed aboard and put on the life jacket and issued an air horn to The Boss as we eased out into the lake. I could almost see the front of the boat and we just managed to miss by a full 3 feet one of the floating NO WAKE markers. The lake was like glass and there was no wind. The water temperature was 55° at the ramp. The air temperature was 44°.

I immediately switched on the GPS mapping and saw our last 500 boat trails headed out into the lake. All I had to do was follow the thick black lines across the lake to Cedron Creek. Needless to say, my thoughts of just taking off and blasting across the lake dimmed quickly, especially when The Boss began shouting instructions and wanting to know “Where are we?” We idled across the lake.. actually, it is much harder to follow the boat trails when you are going slow than when you are going fast. Small corrections in the steering lead to major variations in the actual path. Our boat trail today looked like a ring fry from Jack in the Box. It took about 30 minutes to make the mile trip across the lake. But perseverance and technology won out and we went right to the weigh point I had for Cedron Creek. We killed the engine and began breaking out our tackle when the roar of another engine pierced the fog… man you can hear stuff coming from 10 miles off in the fog. Amazingly they came right up behind us and finally slowed as The Boss was nervously fingering the air horn. Fortunately they got within 20 feet and saw us and decided that they were not where they thought they were and they roared off into the fog again.

We got to fishing about 9:30. Fog was less dense close to the shore line so we fished some points we knew and around 10:30 the fog started to lift. Here is are some photos about 10 a.m. 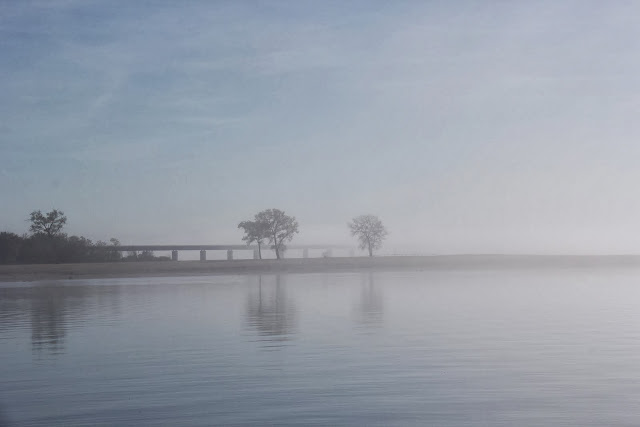 Hey, we can see the bridge now! 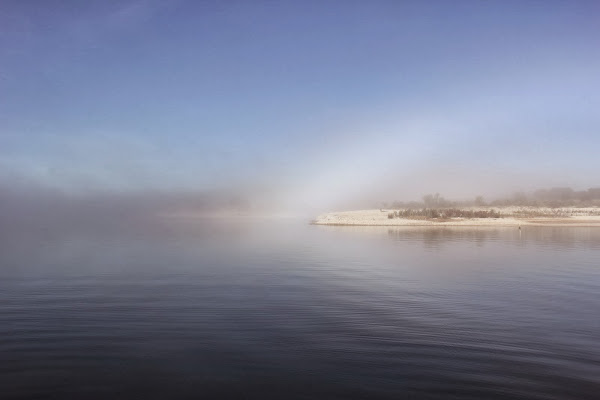 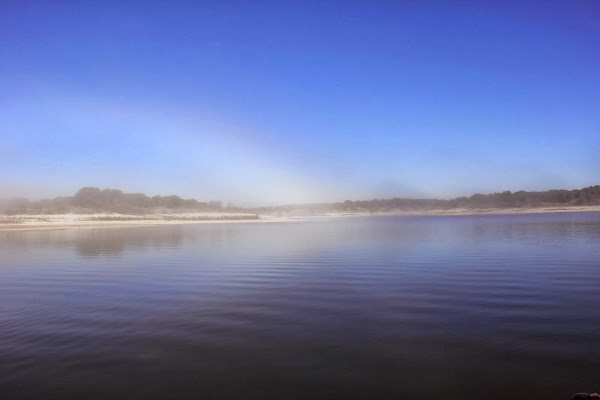 Right on cue, the fog lifted completely at 11 a.m. We hadn’t caught anything and had not had any bites so we left our favorite point and headed to a spot we caught a couple of fish on a couple of weeks ago. And, it paid off… the first cast to an offshore hump netted this 2 1/2 pounder. 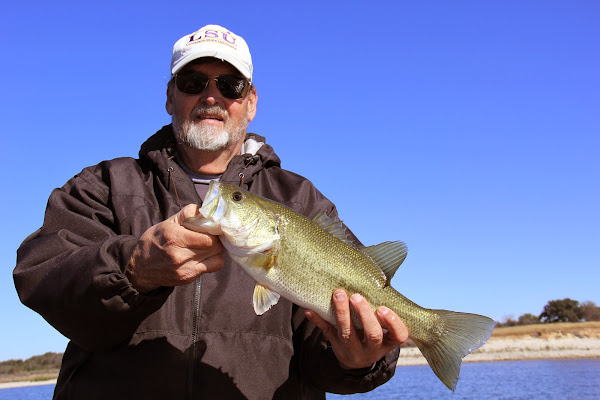 We fished for another hour, had lunch (a ham and cheese wrap) and then a nap in the sun… probably would have slept a little longer but the bees got active. We fished another spot or two and then it was 2:30. Five and half hours on the lake. I had 4 bites and caught one fish. The Boss didn’t get a bite. We didn’t mark any concentrations of fish anywhere we went.

The summary of conditions today at launch:

Air temperature: 43° Warming to 70 plus in the afternoon

And, we had an email from Jacob Stanford. He and his bunch fished Whitney on Saturday. Here is his report:

We ended up with a small limit Saturday out on Whitney. Pictured here is our 5 keepers we caught. Caught everything on squarebill cranks fishing over rocks and around timber in the backs of coves in 2-6ft of water. We fished kings creek, the cove where uncle Gus marina is, and another cove by the dam that I don’t remember the name. Launched out of the Lofers Bend ramp by the dam. All in all a good day! Caught around 10 total 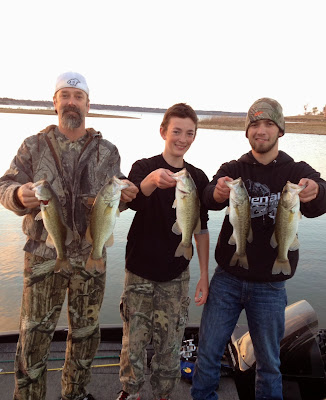 Our thanks to Jacob for sending in that report.