Well, we made it to the lake again yesterday…..   I had sick spell on Friday and wasn’t sure when I would be back on the water, but it proved to be only a minor episode and we were back out there today….

Well actually, we got a pretty late start.  Last time we were out, I noted that it was taking more to run the trolling motor and when I charged the batteries up last week one didn’t charge…  So I waited until about 8:30 a.m. (post nap time) and then headed up to Bass Pro in South Fort Worth and picked up a replacement battery. By 10:00, The Boss and I had the battery installed, lunch packed and we were on the way to the lake.  The cows were feeding in every pasture on the way to the lake.  Rio Vista is still working their road project and it is a one lane deal north of town during the day.

At 11:00 when we arrived at McCown the stats were:

Yep, the lake is still falling.   But, we had no problem at the McCown ramp.  We launched from the middle lane without issue.  The sliding dock hasn’t moved and it is a step down or up getting in and out of the boat.

We went down to Bee Bluffs and fished because we could.  With the wind being only 1 or 2 mph, we could fish anywhere we wanted.  It was just next to calm. 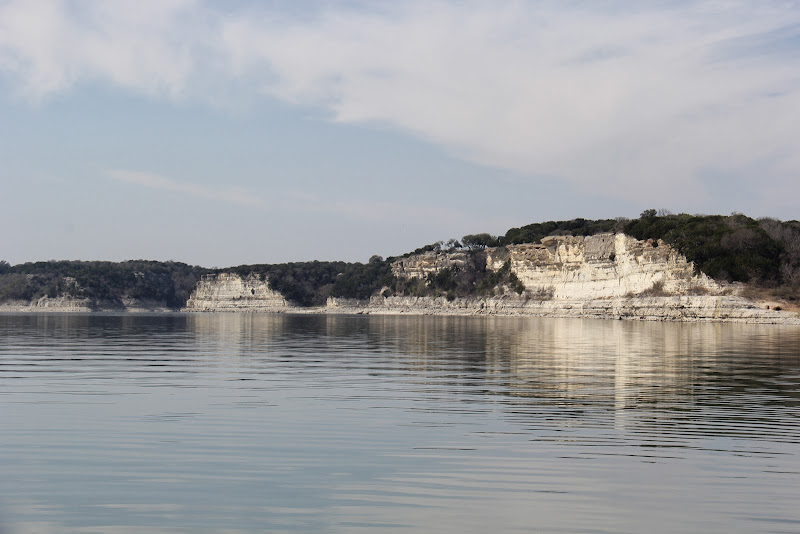 The Boss was having a hot morning, she boated two spotted bass and lost 2 more within the first hour. 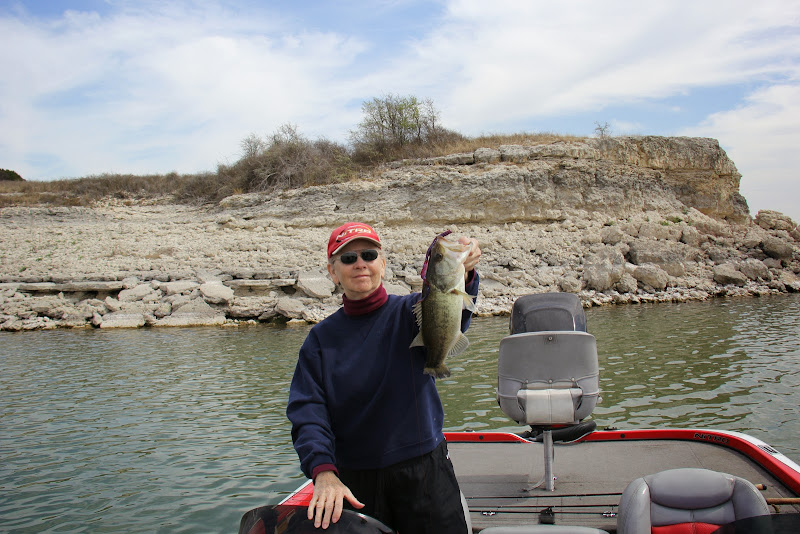 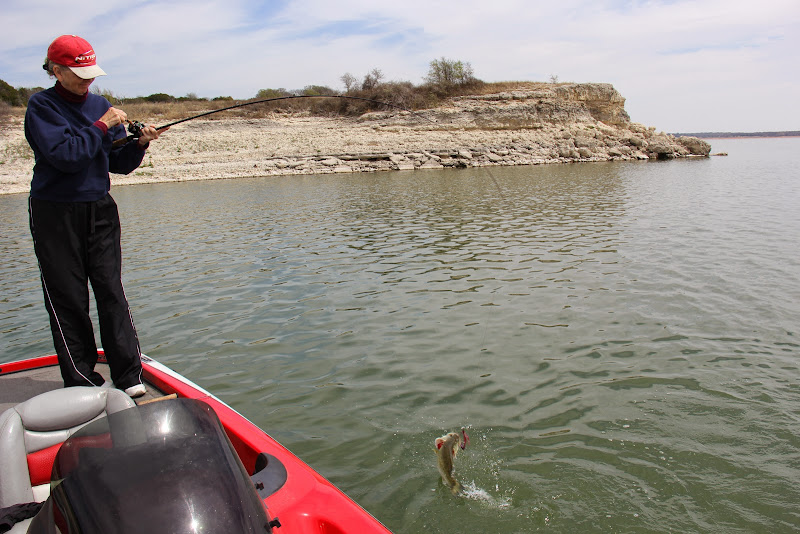 She was having a field day and loving every minute of it.   I hadn’t had a bite.  She was fishing a bag of blue fleck Old Monsters that she had had stashed.  I was fishing a Red Shad.  Both of us were fishing T-Rigs since that is what she caught her fish on last week.  You note here that I was taking pictures.  She wasn’t shouting for the net; She was practicing her Bill Wilcox (or was it KVD), pitch them in the boat swing… does he do that?  I think he doesn’t like to let them touch the carpet.

There were some geese circling to head north..  they were honking and carrying… sounded like a carnival or something out there.  We did see a pair nesting.  This one tried to lead us away from the nest. 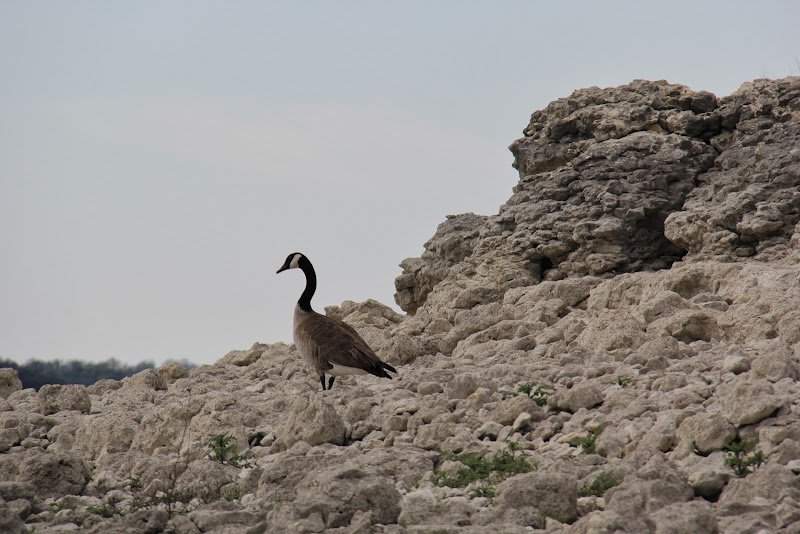 We had some fun watching them as we ate a little lunch.

We fished around Bee Bluffs for about 2 hours and didn’t pick up any more fish although The Boss did miss a couple more.  I just couldn’t get bit.

We went back up to Cedron Creek and fished for a while. I stole one of her blue fleck worms.   I had two bites and missed them both, (the hook broke off on one) and I think The Boss had another one or two as well.  I finally connected on this 3 lb 7 oz fish. 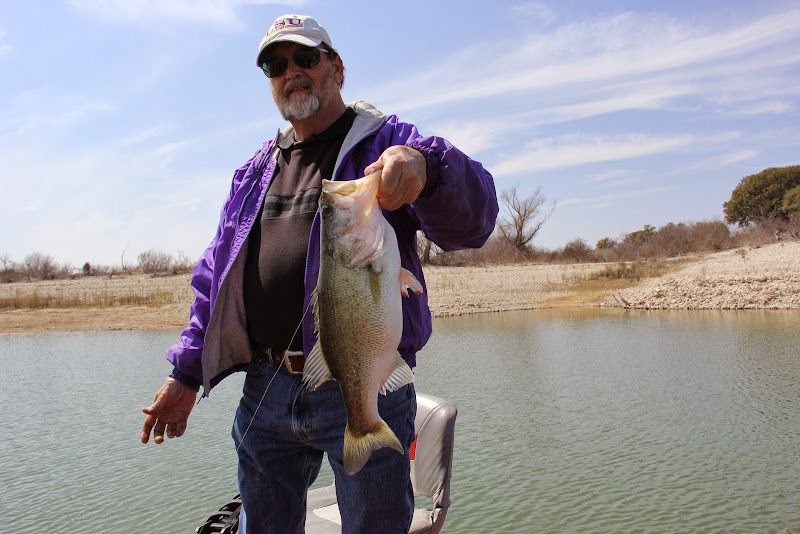 We were back at the ramp at 3:30.  We had bidness in town and had to get back.  I think the fish were just warming up and really starting to bite.  You know when I am catching fish, they are biting and anyone can catch them.

This is what the parking lot looked like when we left.  The afternoon brought several rigs. 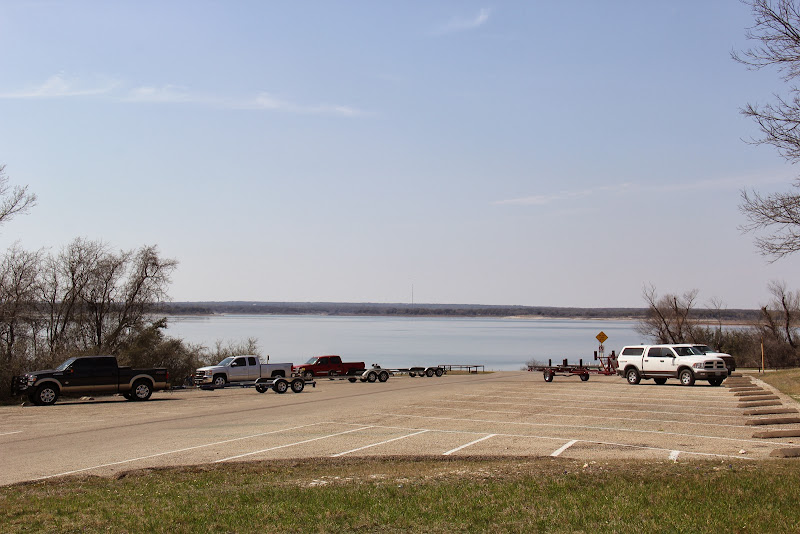 I think there had been only two rigs there when we arrived.  Of course we got there late and the real fishermen could have already loaded up and gone to the house or the coffee shop.  You can’t make it out in this photo, but the truck closest to the ramp on the right is a Lone Star Outdoors TV vehicle.  He wasn’t pulling a trailer so, I presume he was ridding in someone else’s boat.

I don’t know where folks are fishing.  We didn’t see hardly anyone until after lunch and then they were either headed up or down the lake.  They were not fishing mid-lake like we were.  Just as well.  We didn’t miss them or their boat waves…..   We enjoyed sitting and fishing slow in our spots, even if the bites came slow at times.  I think we ended up with a 8 or 10 bites and 3 fish….  not a bad day, in fact it was a GREAT day.. of course any day on the lake is a great day, especially if you can catch one now and then.

The Farm Bureau Lake Whitney Open is on Saturday and the Burleson Bass Club Open is on Sunday.   There will be lots of fish caught this weekend as those folks know what they are doing.  We have heard (or seen on TFF) that the Farm Bureau Open has banned the Alabama rig.   Don’t know that for sure but if it is true we think it is interesting.  We have never fished one.  Our tackle is too light to throw those and we are too old to do it too.   As our buddy the Lureguy says “Its just another lure” and he tells us he has thrown one a lot without a lot of luck… just makes you tired.    I loved the whining on TFF.. the comments about banning trolling motors and sonar were pretty funny.

I didn’t see any results for the Fun N Sun Youth Tournament on Whitney last weekend….  I guess it may be a day or two before anyone gets around to posting those results.

Well, hope you folks find some days to fish this week…. the weather-guessers are predicting a little rain this week.  We need some rain, in fact we need a lot of rain to kick the lake back up to pool level.  It will probably take a hurricane to bring that much water though.

I think the fish in Whitney are just starting to turn on…  wet a hook if you can.