Just another great day on the lake….   and it was great to be out there again…..

We took our time getting down the the lake this morning.   It was about 40° when we got up around 5:30..  pretty cool for us old folks.  We ate a good breakfast and took care of a couple of chores an then elected to take a nap and wait on it to warm up a bit.

By 8:30 or so, we were loaded up and headed to Whitney.  It was 43°.   Just an advisory word to those coming from Cleburne.  Hwy 174 though Rio Vista is under construction again; they are doing some re-paving.   It was stop and go on the north side of town. 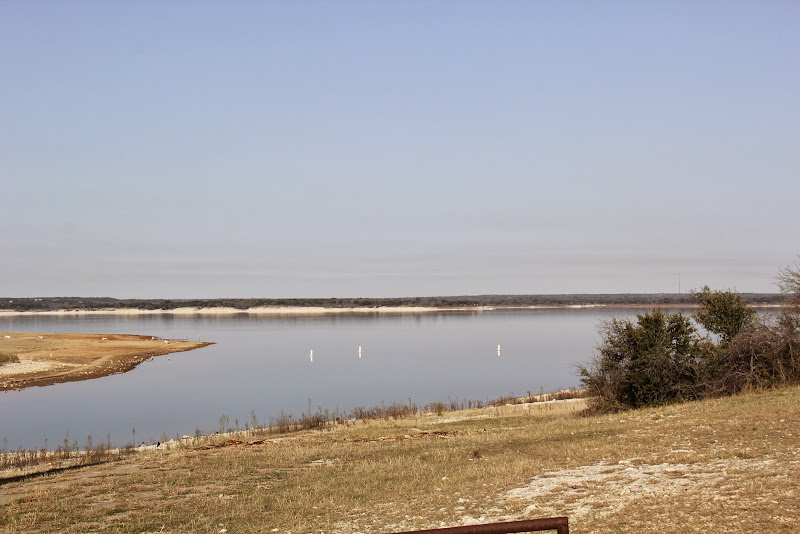 There were a half dozen rigs on the ramp when we arrived and another boat went out the same time we did though they were going after sandies.  We cruised over to Cedron Creek and fished a couple of our favorite spots.  We spent about an hour over there and I think The Boss had one bite.. she just picked up her worm and there was a fish on it, but it dropped the lure before she could get the hook set.  From there we went on up to Bee Bluffs and fished a spot or two here and there.

I missed a fish that gave me two good bumps on a Carolina rig.  I think I am out of practice.  It had been so long since I had had a bite, I didn’t know what to do.  But The Boss knows what to do with a tap-tap.  She boated this hog while I was hung up.

How do you like that smile…. grin, what ever?

What a beautiful fish.  She said it was long with a big mouth, but wasn’t fat.  It weighed in at 4 pounds 10 ounces.   All I can tell you was that it looked great.   I am going to skip most of the part of the story about my being hung up while the fish running around the trolling motor and made some Olympic style jumps on the back side of the boat.  I also an not going to mention the stream of orders that were coming from The Boss.  I did manage to disengage my reel and grab the net before I was thrown overboard though.

A little further down the way, I managed to boat a little spotted bass that might have went a pound.. or not.   At least I wasn’t skunked.  But, I did pass on getting a picture taken with it.

We gave up the ghost around 1:30 p.m.  We had fished for 4 hours.  We had a combined 4 bites and each boated a fish.  The Boss was just luckier than I was.  The water temperature had come up to around 54 or 55 degrees and the wind had come up to about 5 or 6 mph.

The lake had quite a few boats on it today.  There was one that came in when we did.  That guy said he had caught one today, but didn’t mention the size after I told him about The Boss’s fish.  He did say that it was tough today.  He said he had fished a tournament here on Saturday when the wind was howling.  He said that on Saturday you couldn’t get a lure in the water without catching a fish.. windy day, but they were killing the fish.   There was also two more boats putting in as we left.  As things were warming up, folks were heading to the lake.  We probably met another 5 or 6 rigs headed to the lake as we were headed back to Cleburne.

As far as the ramp at McCown goes, we did not have any trouble launching, though the sliding dock is getting close to not being usable, it is getting toward being a big step up to get out of the boat.   No issues at all getting the boat on and off the trailer.  Only the middle lane of the 3 lane ramp is usable though.  You can tell the Corps is letting some water out as the level has dropped much faster during the last week.