But, the wind wasn’t the 3 to 5 that the Internet Weather said it would be.

We got up about 6:30, made a quick check of the weather then headed to the lake. We were dropping the boat in the lake at McCown Park at 7:30. There were 3 boats already in the water. Here were the conditions:

Skies: Blue Bird… not a cloud anywhere.
Air Temperature: 55°
Water Temperature: 70°
Water Clarity: For Whitney, it was muddy on the main lake (if it were Aquilla it would be normal) Visibility was about one foot.
Wind: South, Southwest at 5 to 10 mph
Water Level: 521.04 or about 12 feet low. It is up about 6 inches over last week and is still rising a little.

Just sos you know, The Weather Channel puts the winds at about 16 from the South Southeast for Sunday’s Bohemian. This will work just fine for the tournament. Harbor Master Marina is protected and always good when the wind is from the South.

Today, I didn’t get any hits on a crank bait. The Boss picked up the first fish about 15 minutes in. It went about a pound. She caught it on, guess what, a Texas Rig Zoom worm. I continued to pitch the crank bait for a while, with no takers.

By 9:30 we had moved on around to a main lake point.. muddy water… and worked the worm and the crank bait with no takers. We moved over to Cedron Creek and worked one of our favorite points. We got a few bites, but the fish were taking the back part of the worms (we were both fishing worms now). The fish were concentrated on the point next to a drop off. The Boss picked up two more fish and so did I. I wasn’t ashamed to have my picture taken with a one pounder.. I needed one for my article. 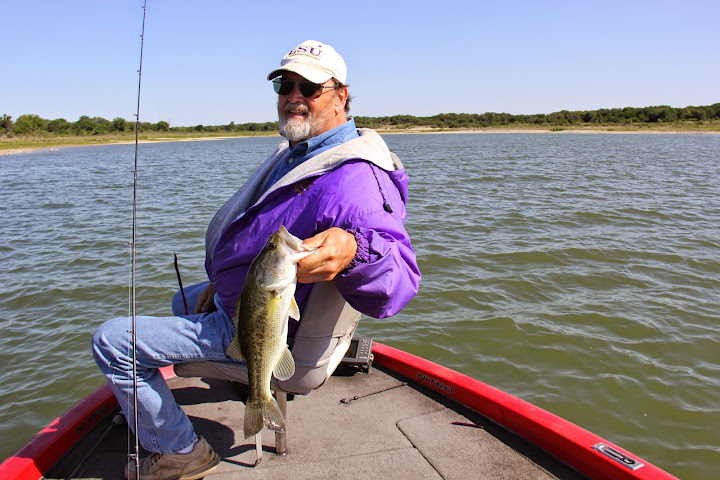 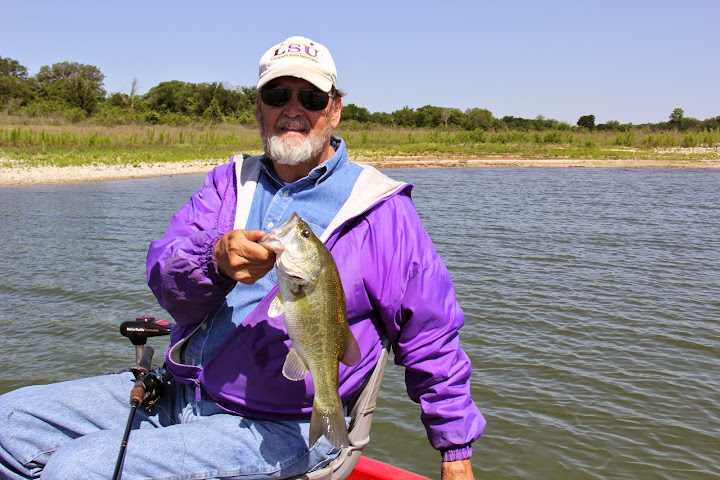 It was 11 a.m. by the time we had the 5 fish; none more than a pound or so. The wind had picked up some and our fun was more like work to me up on the trolling motor…. I told The Boss I was ready to go to the house and get a nap. We have a bluegrass jam to go to tonight and I didn’t think I could fish all day and then do that. The Boss was ready to fish on, but I was ready to give it up.

When we got back to the ramp, one or two of the other rigs had already left. And, we did note a few more folks than normal fishing today. I would say we saw 8 to 10 bass boats. I guess some guys were practicing for the Bohemian.. Donno. Maybe they were just enjoying a day when the wind was down some. I am sure the fresh water and the murkiness of the water didn’t help today. Also, the little cold snap might have made it a bit tougher. But my guess is that by Sunday, those tournament fellas are going to be loading their boats. Here is today’s photo of the McCown ramp. 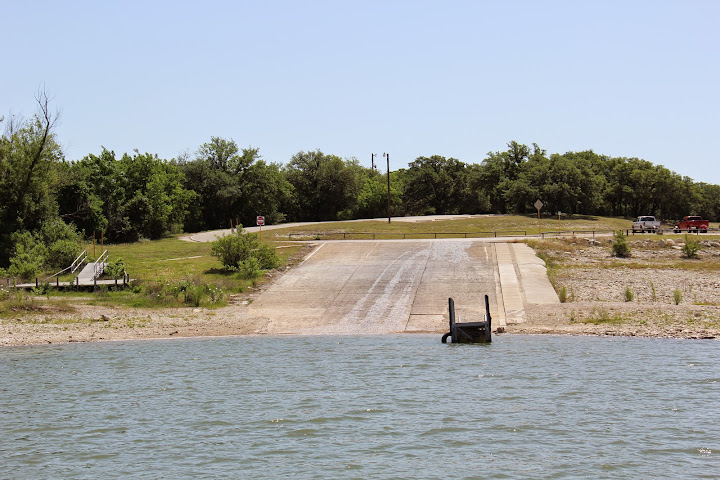 Notice the weeds surrounding the old floating dock… that think hasn’t been in the water for more than a year… maybe two.

There will be no issues with the ramp at Lofers Bend East or Harbor Master Marina. There is plenty of water there. Also likely to still be functioning are the following ramps:

I don’t know about the river ramps… maybe the Hill County Chisholm Trail park ramp… not sure.

We plan to be at the weigh-in at the Bohemian on Sunday… it is always a good time and it good to be humbled by the folks that really know how to catch fish…. and tell good stories about the ones that got away. Hope to see you there.