Yes, the cows were feeding today…  at least where we were. 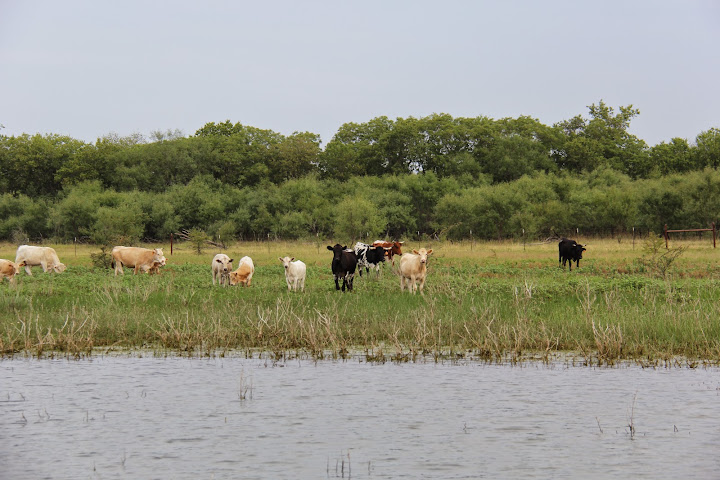 While the cows were feeding the fish didn’t bite all that well where we were fishing.  We moved to some new territory today trying to find some fish.  We have caught a few in recent weeks, but not any numbers or any fish of size…   We would have liked to have had a couple of limits and some of the big girls in there… but no such luck again today.

We might say that it was a typical July / summer pattern for fishing, but it really wasn’t a typical summer day..   In fact, we have had a number of unusually cool summer days and some rain in July here in Central Texas…  that ain’t your Daddy’s normal July in Texas.   Usually the weather-guessers can fax in the weather forecast for July and August.. Hot and Clear, no wind.    That hasn’t been the case at all this year.  We have had some semi-nice days… days that start in the 70s and don’t get out of the 80s…. just amazing.   I say, use them if you got’ em.   Be on the lake every chance you can when you have weather like this.

The Boss was her usual self.. ready to go at day light…

She worked a Pop-R for about 15 minutes and then went to her tried and true worm rod…  She wanted a fish.

I found one, it missed my Pop-R.  Before I could get another cast in there, she had that worm right up beside the bush near where I had had my strike….   Needless to say she boated the fish.

She loves it when she catches the first fish

It was still early when she boated that one.  We were on the water about 6:30 and she had it in the boat by about 7 a.m.    But, the fish were not where we were fishing or they weren’t biting what we were throwing.

It took a while and moving to another location, but I found some fish that seemed to like my Pop-R..  Well, I found two any way.  The first one produced a huge strike…  I thought the wave he made was going to be a tsunami, a title wave that was going to turn the boat over…  well, maybe not that big, but it was pretty big.. got my attention.  We made the water foam around that bush with Pop-Rs and worms, she didn’t hit again.   But, 20 feet down I pitched the Pop-R beside a clump of grass and a 3 pounder gobbled it up…. I mean he swallowed that Pop-R to the point you could not see it. 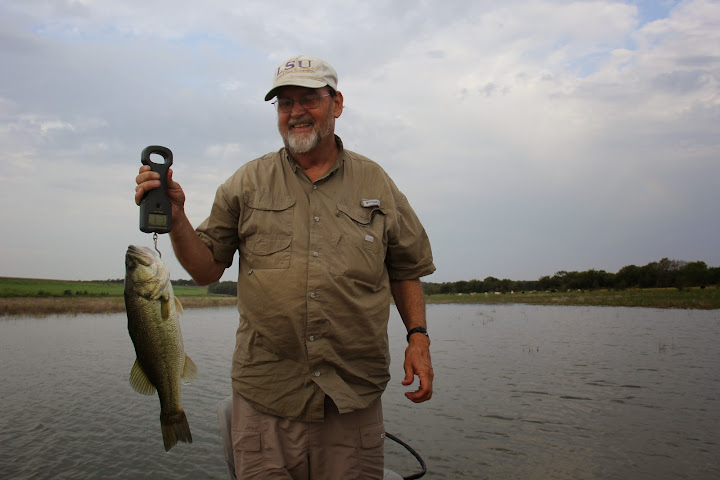 It wasn’t a monster, but it had been so long since I caught a decent fish, that it felt like a monster. The Fish came from an area with less than a foot of water and the only place he had to go at first was up and dance he did. But then when I got him to the boat, he was all about being under the boat and not in the net. but The Boss finally got the net around him and got him in the boat.

Actually, we didn’t go to Lake Whitney today, we went to the back side of the Whitney Lake Map, Lake Aquilla.  Aquilla is just south of Whitney.  Here were the conditions:

We could have enjoyed it a bit more if the wind had been 2 or 3 miles per hour less than it was.  It was just enough to make it work running the trolling motor and just enough to create the more than occasional back lash.. or whip lash as I call them.  It is a good thing The Boss is so good at getting out those backlashes… otherwise I would have to use a dozen reels just so I could keep fishing.

It was a really neat day.  Since we were not catching many fish, we took a bunch of pictures of the daybreak and the early morning.  Here is a slide show with some of the daybreak photos.  I hope you enjoy them.

The ramp at Dairy Hill is in great shape, as it should be when the lake is at normal pool level.   Last year the Corps upgraded the rest rooms a bit.. but they are still the flush-less toilets.. While the building looks better, it still has the smell..  tough early in the morning.  A person could loose their breakfast in there.

We were the first ones to launch at Dairy Hill.  There were 3 other rigs there when we left.  One of the boats appeared to be fishing for whites, we saw them out in the middle of the lake near the dam.  Another boat launched and immediately when up the west fork of Aquilla.  We were able to fish where we wanted with out being close to any of them.  It was a nice day on the lake.   It was just unfortunate that the fish were not feeding like the cows were.. or maybe it was just unfortunate that we did not locate them.