In the summer time…. when all the trees and leaves are green….    And it is HOT!   On the ride down to the lake this morning and on the ride back, we did not see a single cow….  They were not eating and they were not laying down.. they were in the barn in the air conditioning.

We rolled into McCown Valley Park at 6:54 a.m. this morning.   We were the 3rd or 4th rig there.   Actually, one boat just took off and another unloaded right in front of us.

Conditions at launch were:

The ramp at McCown is in great shape.  The Corps still has the boat dock in one lane, making only two useable, but hey it is better than the one lane that had been useable.

We moved to where we had caught some fish last trip. We found some shad running and bass chowing down on breakfast in them. If we hadn’t stopped to take pictures, we probably would have boated at least a couple more. 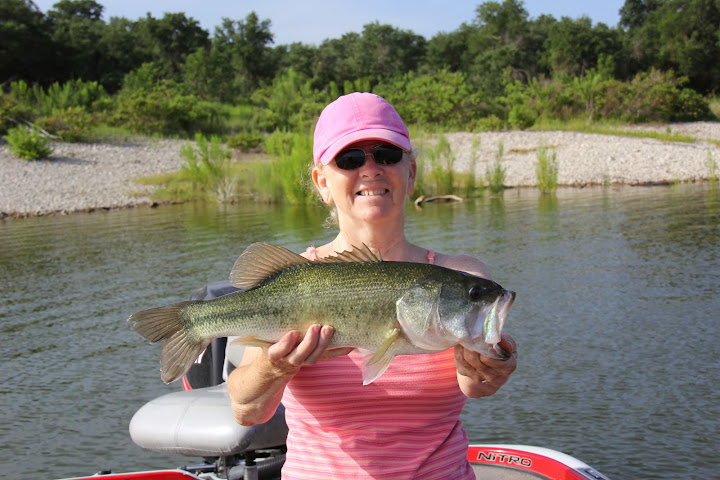 This fish picture would have had a Pop-R in the fish’s mouth too, BUT, I lipped it at the boat and it put the hook in me… The barb was just below the skin… The Boss had to get the pliers and remove the hook from me before she could get it out of the fish… I might just leave those lip jobs to Bill Wilcox. The net is a lot easier.

The bass were busting shad in shallow water. I missed one just before The Boss threw in behind me and caught the one above. But, a cast or two later I had my fish, and it was 2 pounds 15 ounces.  Turned out to be Big Bass…. 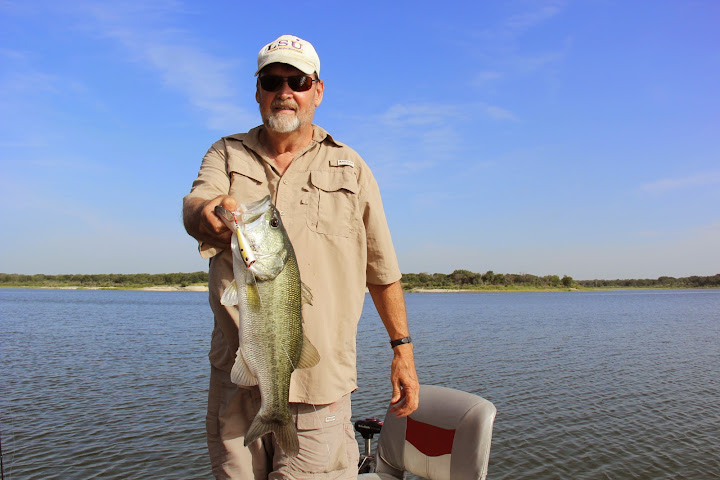 This morning, I started out with the H2O top water, but had no hits. After The Boss caught her first fish, I changed to my Pop-R. Last week it was just the opposite…. Last week, The Boss wasn’t getting any hits on the Pop-R and I was catching them on the H2O…. strange.

By 10:00, it was 93° and the wind had died down. It was hot. We could have fished on, in fact we met another guy at the ramp who was just putting in… but he was young and we are old…. It was just too hot for us.

All in all, a decent summer day on Whitney. We didn’t see any birds to help us find schooling shad. We just lucked into a spot where the shad were bunched up by some bass. We should have not taken any pictures and just fished… we would have boated several more. The bass and shad were active where we were for a good 30 to 45 minutes.  In fact, we fished almost 4 hours exactly.  We caught all of our fish between 7:15 and 8 a.m. , most around some shad.

So if you want to catch some fish.. find some shad in shallow water and you will find some schooling bass… lots of fun.