Yep, we were back on Whitney today after being on Aquilla the last two trips…   We didn’t catch anything last time on Aquila and nothing on Whitney today…  not many bites at either place.  So, at this point “What difference does it make?”

But, it was a very nice day on the lake….  You just can’t be on the lake at sunrise and not feel great!

It is a few days past the full moon.   With these cloudless skies, I am sure that the fish are feeding at night, but … but…  you would think there would be a few who would be feeding during the day….   This was the view on the west side of the lake at daybreak. 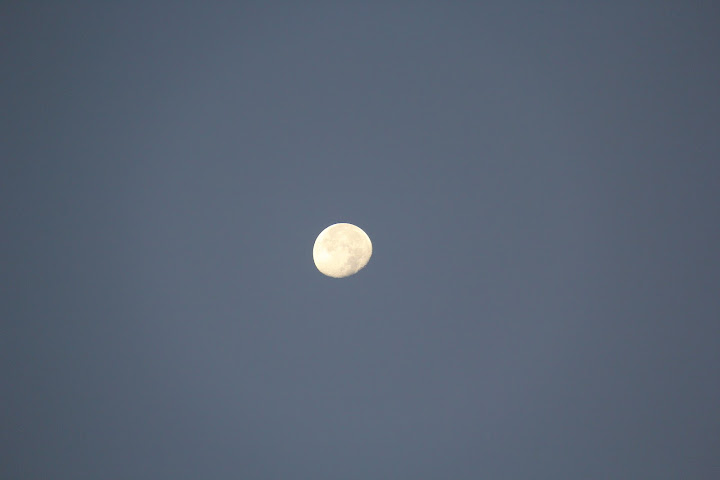 Here is another daybreak shot…  we may not catch any fish, but we get some great pictures of the sunrise.

We fished top water for a while, probably an hour, but did not find any fish.  Not in the flats with scrub brush, not in the stumpy flats, nor on shallow points with deep drop offs.  We did not see any shad in the shallows.  There were some shad breaking out in the mouths of the creeks and a few fish hitting among them.  But, those spots were scattered and the shad did not stay up long.   Last night, I had a tip from a fellow who has fished for years.  He said to fish “clear” lures and to fish very slowly this time of year.  I should have listened to him.  We fished Pop-Rs, Spooks, and frogs for our top water search.  Nothing.  Zero.  Nada. Zilch.  It was very disappointing.   I had looked forward to a day on the lake.  A day that started out cool and with little wind.

Here are the stats for this morning:

The water level was a strange deal.  We were on the lake Tuesday, July 29…  just a day over two weeks ago.   Looking at our stats from that day, the recorded lake level was 525.39 or 7 feet, 7 1/4 inches low.   Today, the recorded lake level is 524.83 or 8 feet 2 inches low.   Both of these measurements come from the Texas Water Development Board’s Water Data Web site.  What I can tell you is that we fish the same locations nearly every time we go to the lake.   This morning, we noticed that the lake “might be up” when we got to the ramp.  The sliding dock base was in the water and I would have had to wade out to the dock to get on it but (there was another fellow there launching from the ramp who took me out to the dock so I wouldn’t get my feet wet).  Then we got to our first location, it was immediately obvious that the lake was up…  brush and stumps we had fished the last time we were out there, were now underwater.  My estimate is that the lake is up 6 inches or so… whatever it is, it is not 6 inches or so lower than it was was on July 29.   I am really scratching my head over this.  I know the lake is up…  I just don’t know about the stats.   What I can tell you is that it appears the lake has come up sometime during the last two weeks (hey we haven’t fished out here in three weeks.  So I would tell you the lake is UP about 6 or 7 inches over the last 3 weeks.   I haven’t ever experienced the water data web sites being this far off….  Really strange.  I guess you would call our personal observations “anecdotal.”

After about an hour, we converted to T-Rigs.   I think The Boss had one bite and I had one bite.  Both were what we would call “grab and runs”  where they took it and ran, but dropped it quickly.  Very frustrating.

We fished the Cedron Creek area and Bee Cove area.  Truthfully, we did not identify any fish on the fish finders in the specific areas we fished.  There were no fish on the ledges and humps that we typically find fish.    As I said, the shad we saw working were out in the mouths of creeks and they were scattered and not in any numbers.   It looked like there might be an occasional bass hitting among them, but for the most part it looked to be whites / sandies.

We were the first to the McCown ramp this morning, but we were the second in the water.  Actually, we launched at the same time (6:30 a.m.)  as another fellow who said he was fishing “a little tournament” on Whitney this weekend.  He was the guy that saved me from getting my feet wet.  He said it had been some time since he had been on the lake…  well it was the same for us.    We saw another boat launch from Cedron Creek Park; they appeared to be fishing for whites.

We did take a few pictures.   Here are a couple.

I had just told The Boss “that decoy fooled me for a minute, I thought it was a duck”…  about that time it stood up…  It was a fake decoy.

This is the ramp in the back of Bee Cove.  It is open to public access.  I have never launched there.  There are two entry points, one from the road at the top of the hill and the other in The Canyons subdivision.   The direct access to the ramp definitely requires a 4 wheel drive.  The road looks like it is practically a 45 degree or better slope and the road is rocky.  I have never found the access from within The Canyons.   I understand there is a similar “unofficial” ramp like this in the back of King Creek.  I have heard that it is a one lane road to that ramp as well.   Personally, I prefer the ramps in the Corp parks…  a lot less risk.  But, I have seen a lot of folks using the ramp at the back of Bee Cove.

Fishing for us was tough.   No top water bite and only two worm bites.  There were a few shad working in deep water around some of the main lake creek mouths.  But, the weather was great.

The parks were relatively empty.  Labor Day is coming.  The weather is great and the lake is in great shape.   If you want to spend some time on the water, Whitney is a great place to be.  The difference between Whitney and Aquilla is that Whitney has great camping and lots of good recreational water.