The Boss should re-write Willie’s “On The Road Again” as “On The Lake Again” for us…  Man it is great to get out on the water.  What a way to spend a November Tuesday.

There were no other rigs in the ramp parking lot when we launched.  But we did see a couple of boats with hunters in them.  As far as fishing went though, we had the lake to ourselves as far as I could tell.

The stats yesterday were:

I think The Boss made two cast before she was saying “I have a bite!”  Then she boated this 13 incher… 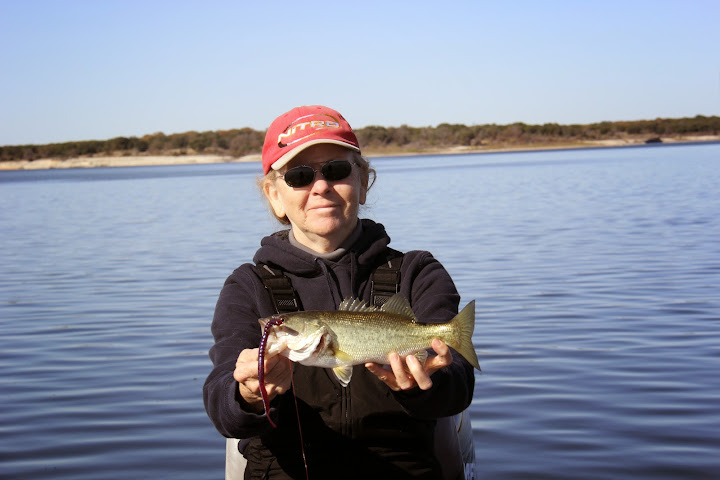 She wasn’t ecstatic, but hey, it was a fish and it bit right off the bat… nothing wrong with that.   She had a couple more bite off that point, but she didn’t boat any more fish.  We could see them on the finder, hanging about 8 to 12 feet deep right on the edge of the drop off.    We just couldn’t get them to bite.

We moved on up to the Bee Bluff area and I was able to get a little bite myself.  Boated this 6 incher..

This one was in the boat two hours after the first one….  We had had a few bites in between, but we just didn’t get any hook-ups.  I think The Boss missed one pretty good fish…  she didn’t get the hook set and it pulled off pretty quick.

The wind came up about noon and even though we wanted to fish on, there was just more wind than we wanted given that we weren’t catching any fish.  We were back at the McCown Valley Park ramp at 1 p.m.  We got in 3 hours of a great day on the lake…. a lot better than a poke in the eye with a sharp stick… I can tell you that based upon personal experience….

There were some campers in McCown Valley.. I think a number of them were hunters.  I am always amazed at how smart the deer and turkeys are.  When hunting season opens, they move right into the park… the NO-HUNTING area…

The ramp at McCown Valley is still in pretty good shape.  We had no issues launching.  The water level was obviously lower, but it is not hampering getting in and out…  though there is a pretty good step up and down from the sliding dock.

There were a couple of other rigs on the ramp when we left.  I am sure the white bass fishermen would begin to drift in as the afternoon when on.