We were on the lake today.    Haven’t been much lately due to one excuse or the other…. The Boss and I got up, ate breakfast and walked a mile by 9 a.m.   I commented that it was the first day that I hadn’t had any back issues or some other issue in a long time.   She said ” The weather is great, we should be on the lake!”   We had missed the weather Tuesday night as we had been bluegrassing until after 10:30 and I hadn’t turned on the tube this morning so we were just in the dark on what the day was supposed to be like.  We had just come up with the old Willie Nelson method:   Go outside and look!  Hey, the weather was great.  We hustled in, gathered our stuff and headed to the lake.   We didn’t get there until 11:30, but hey, we got there.

The Boss was just pleased as punch to be on the lake again…. she loves the lake almost as much as she does singing and playing the guitar.

The weather was really, really nice… just a tad on the cool side for The Boss, she was bundled up as usual.

The ramp at McCown Valley remains in great shape.  No issues launching although only the middle lane of the 3 lane ramp is useable.

Actually, at first I had to check the day of the week… I thought we had got there on a weekend by mistake.. you know, in the middle of a B.A.S.S. Invitational tournament or something…. There were Hydro-blasters zooming everywhere.   There had only been 5 rigs on the ramp at McCown Valley when we launched, but there were plenty of folks on the lake.   With all those power poles, one would think the bottom of the lake would leak… man alive.   Everybody had them..  We are so out of it…. no power poles for us.   There was a lot of “boat ridding” which told me that some of the folks were not catching fish.  But there were a couple of guys who just flat camped out on two different spots…. one a hump way out in the lake and the other on a shallow stumpy flat.   We were too far away to see if they were boating any fish, but I don’t thing those guys would spend an hour or two on one spot if they were not putting fish in the boat.

We didn’t fish anywhere but the Cedron Creek area today.  And, we slowed way down.  We only fished Texas Rigs.  I was fishing a Zoom Old Monster Plum… The Boss said she was fishing “something close to that” but a slightly different color.   When I caught my first fish in the first 30 minutes, I made sure she got a picture as I thought we might not get any more.

The fish was just about as long as the worm….  terrible.  But, as old A.J. says, Its alright to be little bitty!   We will take a fish any time when compared to none.  But, low and behold, it wasn’t too long before I had another..  a short fish just like the first…  and another… pretty soon I had 7 total.  Here are a couple of those others. 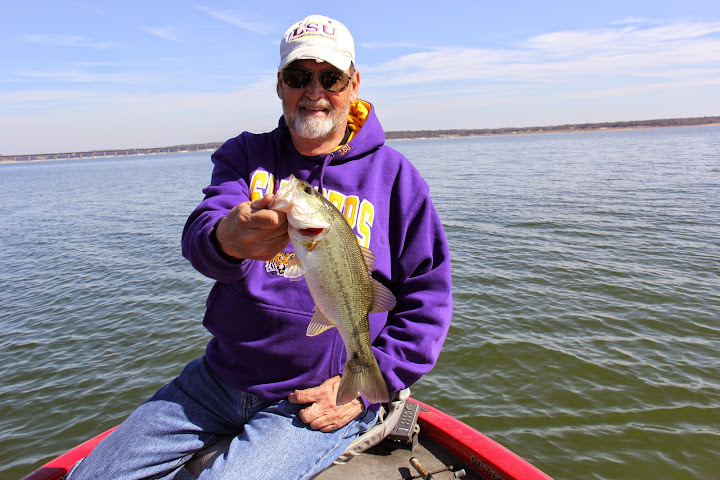 The Boss mumbles something to the effect that if I wasn’t so fat, the fish would have looked like a 10 pounder.  Well, whatever.  I had 8 fish (3 keepers).   All the fish were caught on a T-Rig, with a Zoom Old Monster.  All the bites were similar:  one light tap and then the line going slack.  It seemed that all the fish came straight at the boat.   I just took up slack until I could feel them and then set the hook.

By the time I boated the last fish, it was 4:30 and the wind had changed to the north and it was gusting up to 10 or 12….  So I voted for heading to the ramp.  There were only 3 rigs left when we got there and one pulled out right ahead of us and one right behind us.  Neither boat volunteered any information about their day.   BUT, if I can catch fish, folks who really know how must be killing them…. especially those two boats who were camped out there.

All in all, a great day on the lake for us.  The weather was outstanding.  The Boss said she would have liked to have caught some fish.. she said she had 3 bites and they were similar to mine… very light.  She just couldn’t get a hook set and it was 4 o’clock before she broke down and changed worm colors.  And hey, it is hard to bad mouth a 8 fish day, even if they were mostly little bitty.

On the way out, we noted the turkeys were feeding too…