Well, we finally had another  GREAT day on the lake!!

Seeing the report from the Granbury Bass Club earlier in the week had me doing some thinking about Aquilla.  In past years, A-quilla, as the locals call it, has been very good to us.   We have had some great times there in early spring during the spawn.  And since March is always a windy month which is difficult on Whitney, we decided to give A-quilla a shot.

Last Thursday was a decent day.. wind was down, but it was FOGGY!  Here are the stats:

It was a scary ride down the lake from the ramp….  half speed, but hitting anything out on the lake would have been a disaster.   You could hardly see the front of the boat it was so foggy.   Actually, we were at least the 4th boat on the lake, as there were already 3 rigs on the ramp when we got there a little before 8 a.m.  There was just no way to see anything.   But, GPS and Navionics Maps are very good things for getting from point A to point B, as long as one doesn’t find another boat in the fog. 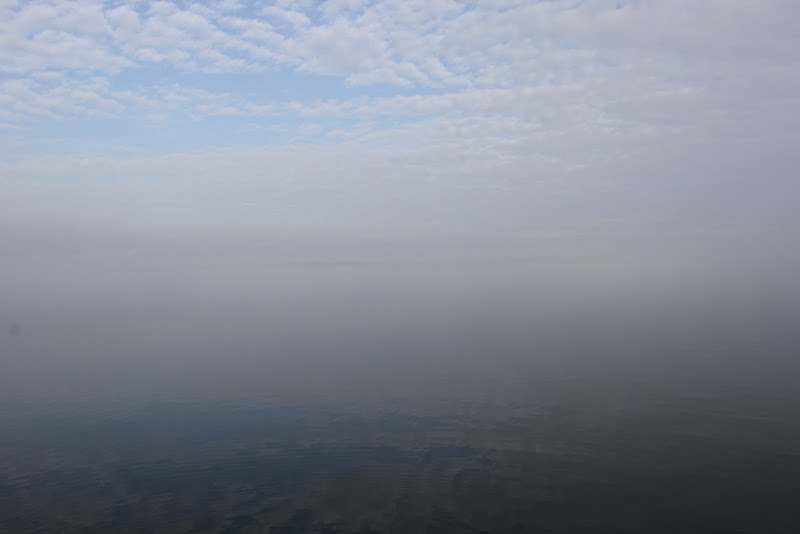 Actually, the fog had lifted a bit when we took this picture.

Here is The Boss working early: 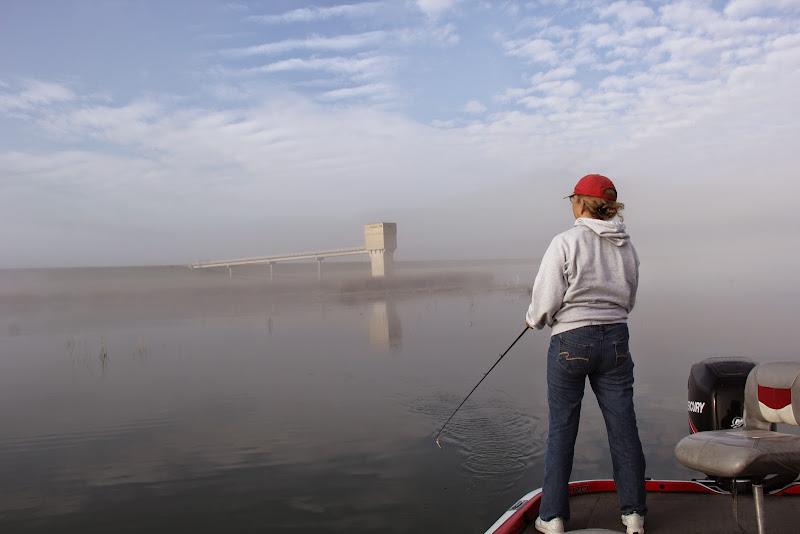 We like the dam area early in the morning for top water and jerk baits.  The dam has been very good to us.

The first fish was a 4 1/4 pounder that bit on a Texas Rigged worm.   It came around 9:00 a.m.   Up until that point, the bass were not interested in any top water lures, and we had pitched several different types. 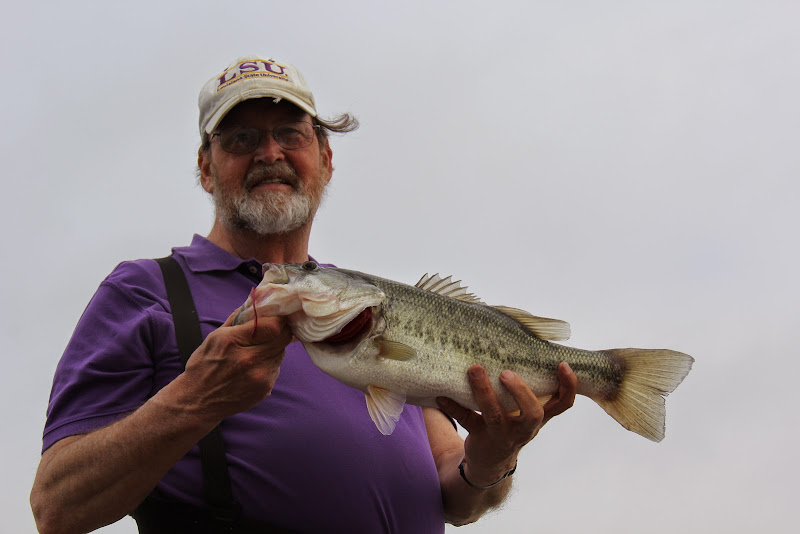 But, that was the only fish we turned up in the first two hours.   We had moved on to a couple more of our favorite holes without finding any more action.  But, then, after the fog lifted, we went to one of our spots and another boat was working it.   We asked how they were doing and their response was “7 keepers.”   We let them alone in the spot and moved on up the lake a little ways, but not too far.  Those guys were having some fun back in a grassy area.   They seemed to be boating fish on just about every cast.  They were laughing and hooping and hollering.  Well, more power to them, it is not often folks have a day like that.  They had told us they were fishing with worms, but I saw them pitching what looked like a white spinner bait.

As we moved away from them, The Boss picked up a 3 1/2 pounder on a worm.  But, she didn’t want a picture, she wanted some bass action like those guys were having.  She went right back to pitching that worm.

Actually, it was good thing that we moved on.  It wasn’t long before I felt a little bump on my Zoom Old Monster.  I tried to set the hook, but didn’t get a good swing at it.   This monster jumped up and shook its head as if to say, “No, not in my lake!”  But, I managed to keep a tight line on it and The Boss didn’t waste any time getting the net.  After a couple of passes by the boat, she got the net under it and dipped up this 7 lb 2 oz old green back…. 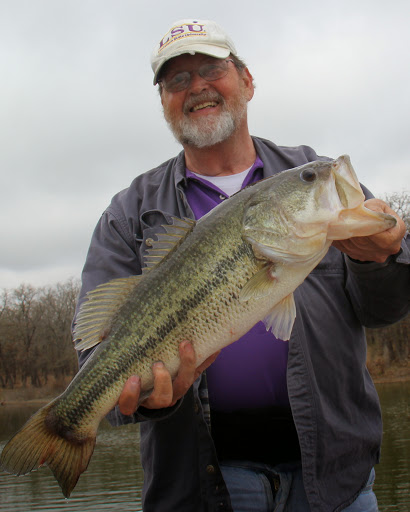 As I picked it up out of the net, the hook fell out.   What luck!   I had tried unsuccessfully several times to set the hook as I was fighting the fish, but it never pierced its lip where it was when I lifted it from the net.  As you can see from the picture, the fish was huge, but skinny.  I am guessing it had already spawned out as it had no belly.   I have a 9 1/2 pounder mounted on the wall at home.  This fish was every bit as big as that one and its mouth was every bit as big as that one.. and much bigger than The Boss’s 8 pounder she has mounted.   Too bad it wasn’t fatter, but what the heck, it sure was fun.

I didn’t get any more bites in the next few minutes as we moved up the shore line, though.  Out of frustration, and necessity as we were trolling to another spot, I picked up my top water to pitch as we changed location.   I picked up another 3 1/2 pound fish that was a twin to the one The Boss had caught. 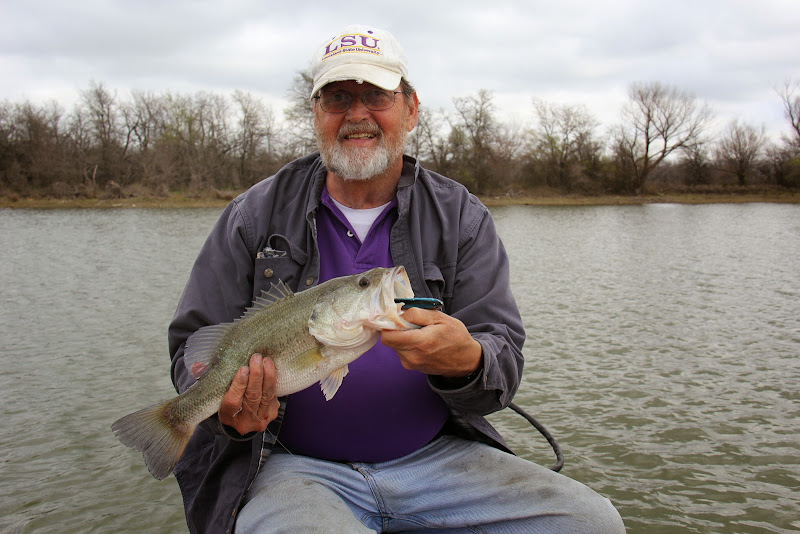 The Boss immediately picked up her top water and quickly boated two more 3 pounders.   We were having some fun.  She let me get a picture of the first one.

She held it out over the water to keep the blood from dripping in the boat…   Those fish were just gobbling the top water lures, swallowing them.

But, the wind came up, I was tired and we were going to Hillsboro for a bluegrass jam Thursday night, so we gave it up at 1 p.m.

We fished for 5 hours and caught 6 fish that totaled about 25 pounds.  A pretty darn good day.  I think we could have boated another dozen if we had kept on fishing.  The fish just seemed to turn on after the sun came out.  It just got really good.

While some folks may have had some difficulties with A-quilla the week before, I think the issues were related to the cold fronts that had been rolling through.

Aquilla is now at normal pool stage.  The lake has been down 3 or 4 feet for some time.  There is lots of grass around the shore line that had grown in there when the lake was down.  The bass are now calling that grass home.  Just any and every clump of grass along the shore line can be holding a hog.  The ramp is in great shape… 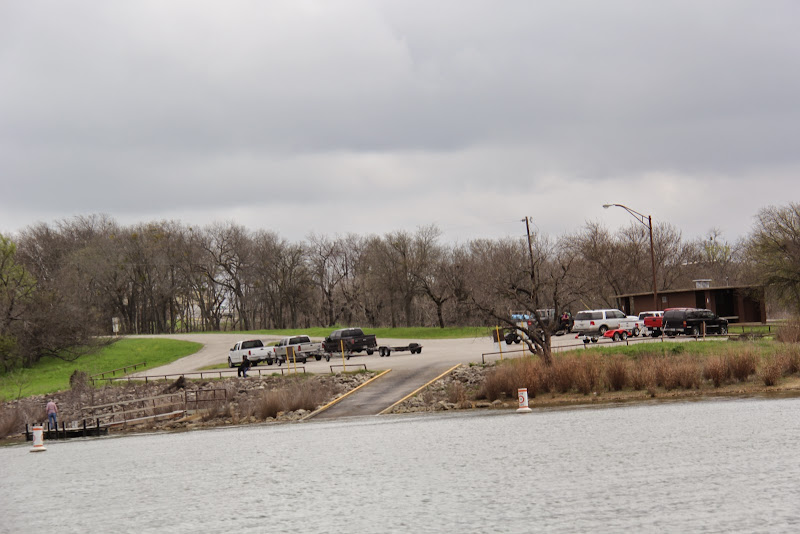 We will be back down there next week beating the bushes.   There is so many fish and so little time….    so little spring time spawn that is.