YES SIR!  We have been busy, busy, busy….   When we haven’t been fishing, we have been blue grassing….   The Boss keeps me going all the time.

It  started last Wednesday…  I had an old fiend, a neighbor and class mate from high school come to visit.  It had been many years since we had gotten together and really since around the time I left college since we had spent any time with one another.   It has been since our high school days that we had fished together.   But, I connected with Hilton Roberts a couple of months ago and we made a promise to get together and go fishing.. Hilton made that happen last week.

I was really happy that he found the time to come over for a few days. He got here Wednesday of last week and was ready to go…. put his tackle right in the boat first thing. Unfortunately, the wind was howling.. or at least so it seemed to me. I thought it was too windy to get out on Whitney when the wind was up in the 20 MPH range. But we were determined to go. We settle on a short trip to Uncle Gus’s Marina. The wind was from the Southwest so we were sure to be out of the wind and waves there.. an easy load and unload too. The lady taking the launch fees tried to take some of the wind out of our sails, saying that folks had told her the fish were not biting… But, just by definition, fisherman are optimists. We paid our money and dropped the boat in the marina around 4 p.m. We only fished a couple of hours, but it was sure fun to get out on the lake and tell old tales.. visit about the good old days and such. And while we were at it, we managed to catch a couple of fish. The Boss and I got ours in the boat, but Hilton’s threw the lure right at the boat.

The Boss caught this 3 plus on a chrome slab.   There were some whites breaking in marina cove and she pitched the slab in amongst them and came up with this nice black.   She also caught a white bass and Hilton caught a small striper on on a crank bait.   Not bad for a really windy afternoon on Lake Whitney.   The water temperature was about 60 or 61 degrees.  It was sunny, plenty of wind, and warm.   A cold front was coming in Wednesday night.

Thursday morning it was around 50° and the wind was still blowing.  The cold front had definitely come through.  We decided to pass on the fishing and do some shopping over at Academy Sports… pick up a few things we might need.  We blue-grassed on Thursday night.

Friday afternoon Hilton was scheduled to leave to get back to East Texas and a grandchild’s soccer game.  But Friday morning we made a run to Aquilla.  It was still cool, right at 50°, partly cloudy skies and water temperature down around 55° about 10 degrees cooler than it had been the last time The Boss and I were on Aquilla.   But, what the heck, you have to play the hand that is dealt to you sometimes.

Right off the bat, Hilton picked up a 4 1/2 pound fish on a crank bait.  It looked like it was going to be another banner day on Aquilla for me.

It turned out to be that fat little gal was our only catch of the day.  We fished from 8 a.m. until noon.   I don’t think we had any other bites all day.  We ran into Jeff Gilbert of Fun-N-Sun.  He and a buddy were working some shallow water.   They said they hadn’t found anything; that the fish had lock-jaw after the cold front and that seemed to pretty much to sum up the situation.   By noon the water temperature had reached 60° and I am sure it warmed on up as the day went on.   It could be that Friday afternoon fishing was pretty good.   At any rate, Hilton and I had a great time visiting about old times, but he had to head on back home to get to the grandchild’s soccer game.  The Boss had elected not to make the Aquilla trip.

Saturday, I think it was windy again, and The Boss and I elected to pass on another fishing trip so we did the next best thing.  We made a trip to Cabella’s and picked up a some more gear.  The boat already sits pretty low in the water…  what we really needed was some more equipment and lures.  But, Cabella’s was having a big spring sale and we needed to save 3 or 4 hundred dollars… you know how that goes.  We made the trip to North Fort Worth, got our stuff and came home.  I did some maintenance on the boat and trailer, hoping that I would get another chance at Aquilla or Whitney pretty soon.

Sunday, The Boss sang at the Hillsboro Cowboy Church in the morning and we spent the afternoon with our son watching round ball… and doing a little more maintenance on the boat trailer… always maintenance to do on the boat and trailer.

It was really a perfect day.  Even though it was cloudy, it warmed up pretty quickly.  Both the air and the water temps moved toward the 70° mark by noon.

The Boss and I caught 5 fish today.   The largest was 4 1/2 pounds and the smallest was about a pound and a half.  They really turned on about noon as the temperature approached 68°.   We both had some good top water action.  The fish were slapping the lures out of the way rather than eating them and we missed several really good fish.  The bass seemed to not like having her Pop-R around and they were knocking it out of the water, but not taking it.   I lucked out and teased the 4 1/2 into sucking in my top water. 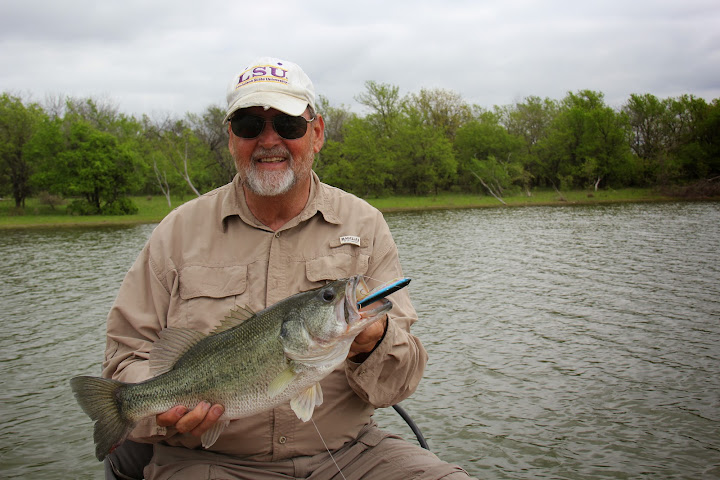 I don’t know how many The Boss missed, but she was really frustrated with the missed hook-ups.   I was lucky enough to pick up this one on a worm earlier.

On the ride home, The Boss noted that I had neglected to take pictures of her fish. But, she was getting strikes so quickly… the action was good… I forgot where I put the camera… it wasn’t “on” … I don’t know.. I just missed getting her pictures… dang the luck.

Yes sir, things have been pretty good the last few days… I can’t complain…  nothing better than old friends, fishing, listening to The Boss sing, and eating her fried fish, french fries, and hush puppies….  living large.  I just need to remember to get her picture when she catches a fish.   I just get busy, busy, busy… getting the net and stuff.