I haven’t given a Whitney report in some time…   So, being as this is the Whitney Lake Online web site, I thought we would get back to our bidness this week.

I have a couple of reports I want to share:

First from Jeffrey Weis is this report:

My brother Ray Weis and I (Jeff) caught these last Saturday (4-11), it was one of those magic days where we caught close to 40 fish!
Have several more pics but don’t want to take up too much space. The picture of Ray holding two fish were caught at the same
time on the front and back hook of a KVD square bill. I saw you lost a fish on your KVD square bill, change out the hooks to KVD
larger size that is what Ray did and if he had not he would have never landed those two fish together. You and The Boss better get
to Whitney soon!
Good fishing,
Jeff 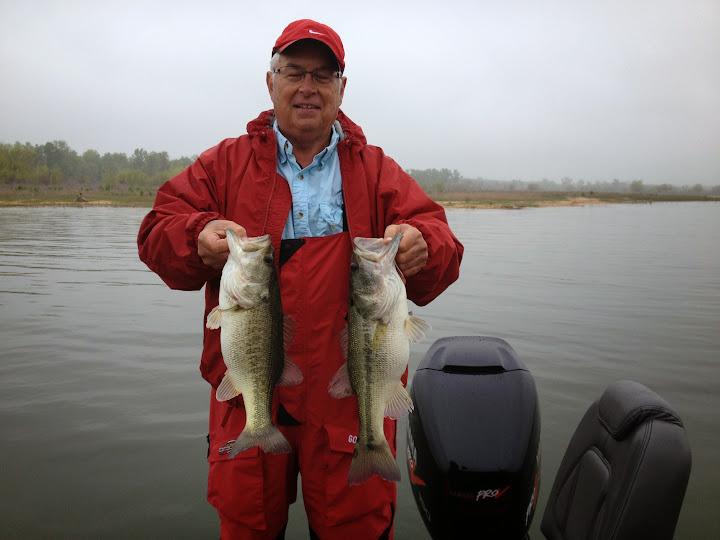 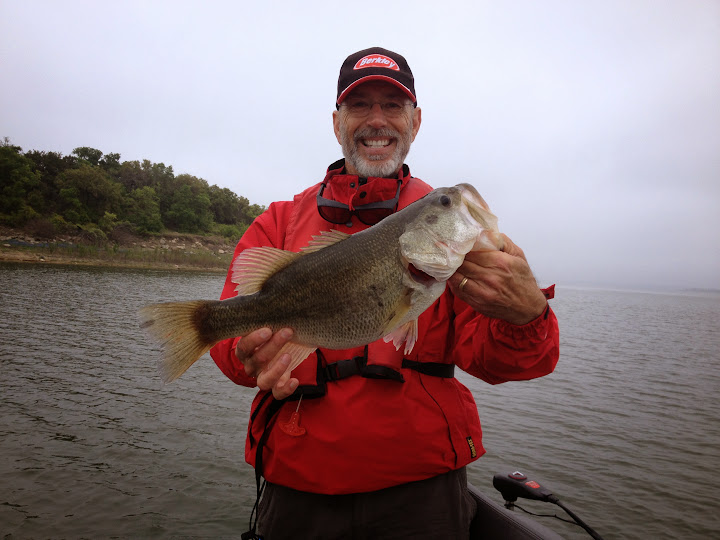 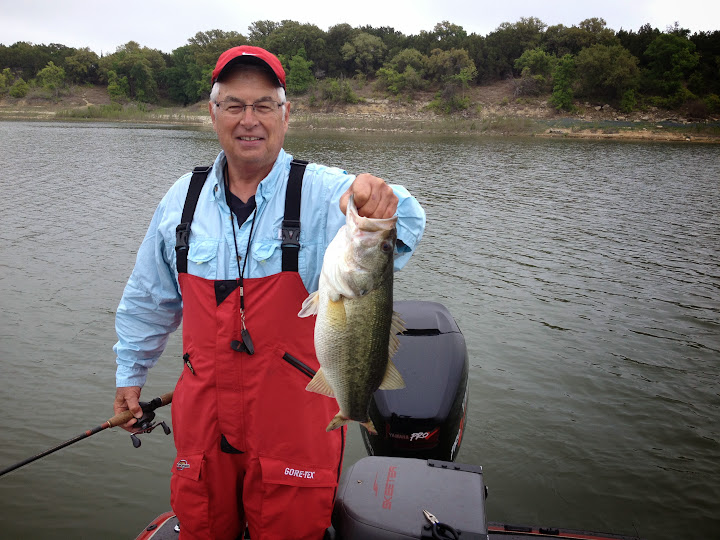 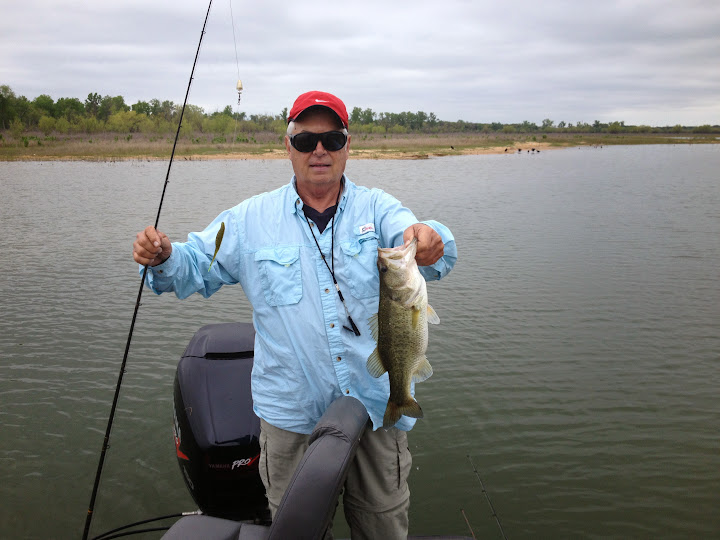 We appreciate Jeffery sending that report in.
Then this was posted on the Texas Fishing Forum by Tanner Crim on 4-19.: 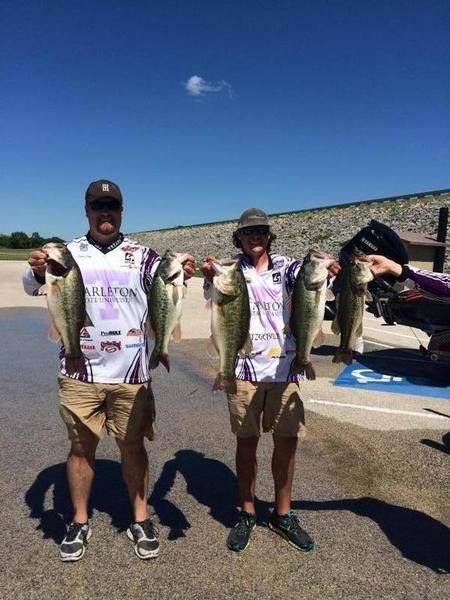 Tarleton State had a club tournament today on Lake Whitney. It was the first time that we had been down to Whitney and after today I’m not real sure why we have never held a tournament there. All 6 teams had a good day of fishing with only one bag under 15 pounds. My partner and I got on a jig bite that was the best that i have ever had on tournament day and caught 5 big girls for 26.15 pounds and BB of 8.10 pounds!  We were north of the bridge fishing wind protected coves. fish were in all of them but the wind protection was just our preference.
We, of course have been fishing Aquila.  Its just down the road from Whitney and is always really good in the spring.  Good catching and easier to fish in the wind.   But, Yesterday and today we were back on Whitney.  We actually recognized some of the locations on Whitney that Jeffrey and Ray were fishing.. and we tried them out.   But, before our fishing report, Here are the stats:
Temperature at launch:  50° on Monday and 60° today.
Skies:  Clear on Monday, Partly Cloudy today
Winds:  Monday it was 5 to 10.  Today, it was calm then increased to more like 8 to 12 by 11 a.m
Water Temperature:   68° both days and was consistent everywhere we fished.
Water Clarity:  Clear, very good
Water level:  523.94 or a little over 9 feet low (it is coming up slowly and that’s a good thing)
Monday we launched from Cedron Creek Park which opened on April First (this is our favorite camping park).  Today we launched at McCown Valley Park.   When the wind is from the north, we like Cedron Creek, when the wind is from the south we like McCown Valley.  Just makes loading the boat easier if you don’t have to contend with the wind.  Both ramps are in great shape.

On Monday we fished from 8:30 until 2:30, 6 hours.  We had some bites and a couple got off, but we only boated 4 fish and The Boss had the only one that might have been a keeper.   We fished crank baits, T-Rigs, and top water.  We caught 4 or 5 whites on the KVDs and most of the bass on the T-Rigs.
Here are the Monday fish that we took photos of…. most were too small to take pictures of.. I would have needed a special camera for fish that small. 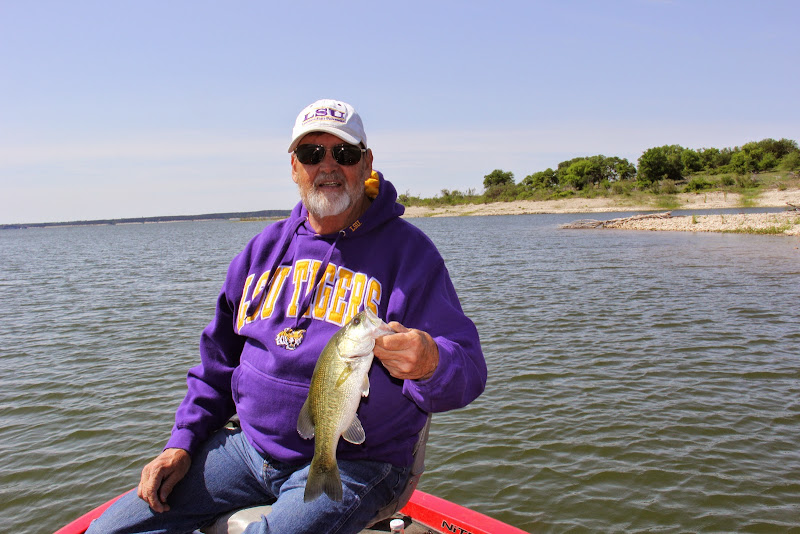 The Boss with her “big fish” of the day.. actually, I think she caught a couple of whites that were bigger. 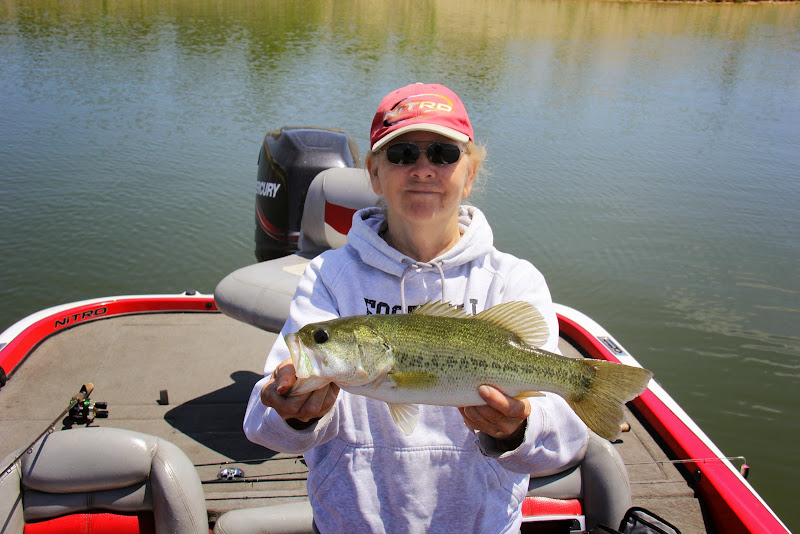 We had a lot of good bites on Monday and we lost at least two good fish.. both pulled off, we think due to not getting our hooks set.  It was easier to find a place out of the wind on Monday (as least places where there were some fish).  We were able to fish the Cedron Creek area and the Bee Bluff area easily.
Today, it wasn’t so easy.  The wind was supposed to be less, but being from the south it was roaring up the lake.   We ended up going up to Juniper Cove and fishing some of the coves and creeks up there.   Fishing was really tough.  We might have had 3 or 4 bites between us.  I think I boated one fish on a KVD 1.5.   I didn’t need those bigger hooks that Jeffrey advised that I might need.  Here is that fish.

But, like every day on the lake, it was a great day.  A great day to be alive and fishing.
Here are a couple of photos..  Pelicans from Monday and clouds from today.

I don’t know.  It is just like old Bill Wilcox said, “Don’t ever leave fish to find fish.”    We were catching on Aquilla.  We were fishing on Whitney.  Great Pro Tip Bill!